« Just in case, here are a few words you can use to respond to a quack attack | Main | Rose Bowl Roundtable: If it looks like a Duck and quacks like a Duck... »

Yes, Virginia, There is a Santa Claus: Noles take down gators on the hardwood 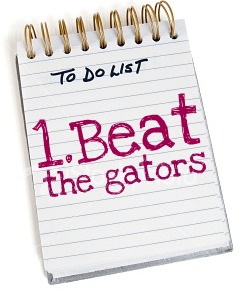 Nope, it's not a typo. Despite the turnover ridden game, the Noles managed to defeat the Florida Gators for the first time in 5 years. With the game tied up and 3 seconds to go, Devon Bookert had an air ball deflected in the basket from a UF player who attempted to rebound the shot. This is the Nole's first quality win (still not a top 25 victory) and is exactly what this team needed with conference play right around the corner. Here are a few quick hits from the game.

Chemistry - The Noles may have finally found a combo that has decent rhythm on the offensive end and rebounds very well on the defensive side. Cofer, Bojo, Bookert, Brandon and X-Man appears to be our best unit.

Struggles - The Noles may want to continue searching for better setups when attempting to break the full court press. They were awful, so enough said.

No fluke - Montay Brandon's early season scoring was no fluke. He has continued to impress and despite not being a great shooter, he has really turned into a solid player. He is by far the most improved player from last year's squad. His ability to finish on fast breaks and at the basket was something missing from his game for the past 2 years.