The ACC Championship Game, or: The Only Way To Watch Decent Football In Charlotte

Let’s talk about Georgia Tech. Well—more specifically—lets talk about Georgia Tech’s football team…because (lets get real), none of you reading this went to Georgia Tech—and rightfully so. If I wanted to spend four years on a campus comprised almost entirely of male engineering nerds I would have gone to UF at half the price. Not exactly a target rich environment. But I digress. I want to talk about Georgia Tech’s football team because as it turns out there is a whole other division of the ACC that also has football teams who play against each other. And, by rule, one of them has to play against a team from the real ACC in the ACC Championship Game. I know—I was surprised too. This game will take place on Saturday in Charlotte, NC. If you arent familiar, here is some background. NC is known for many interesting things such as fielding two collegiate basketball teams that can beat the resident professional team, being the ancestral "home" of basketball, and acting as a haven for NASCAR fans who consider themselves "to classy" to attend races at Daytona and 'Dega.

Anyway, as a devoted and respected member of the sports media (sporadic blog contributor counts, damnit) and a real life actual PhD student, I must remain open-minded and give this ridiculous excuse for a state as well as GA Tech the credit they deserve. After all, they have actually won an ACC Championship game as recently as 2009…which the NCAA vacated due to the results of an investigation. Regardless, they beat out Clemson 39-34 in that game, and any team that causes Dabo to make that face where you cant tell if he’s sad or just really dumb is alright in my book. 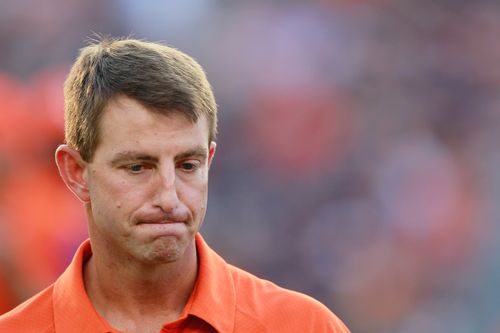 Sad or dumb? You be the judge.

The fact of the matter is that the triple option offense is not difficult or particularly tricky to defend. There are, as the name implies, three possible destinations for the football on any given play. While that may sound like a lot, think of the fact that when FSU has four eligible receivers and a running back in the formation, there are five—six if you include Jameis as a running threat—for a defense to worry about. So, in actuality, three isn’t too bad. The reason defenses hate playing against the triple option offense is two reasons: a) it’s really really ridiculously boring to defend and b) the offensive line will utilize cut blocks on every play.

The first reason is pretty obvious—it takes a lot of mental stamina and patience to play “assignment” football. Essentially this means a defensive player will have to maintain what coaches call eye and hip disciple. This comes down to knowing who you’re responsible for tackling, keeping your eye on that offensive player, and maintaining a committed pursuit to that player even if he doesn’t have the football. This goes against many defensive players instincts. Specifically, it targets those defenses that rely on the “see ball, get ball” strategy of doing business.

In concept this might sound easy to do, but when players start getting it in their heads that they want to be the playmaker on every single down, this balance can break down very quickly. Also, GA Tech's flavor of the triple option relies heavilly on "targeting" defensive ends and linebackers, which essentially means leaving them unblocked. Then, the football is distributed according to whichever route of pursuit the unblocked player takes. For this reason, linebackers and defensive lines must effectively communicate on every pre-snap. I think FSU has the smarts and the coaching ability to be ok in this regard. My only worry is Matt Thomas, who while freakishly athletic and physically capable, is not the most disciplined player by far. It will be interesting to see how he fares in this regard.

The part that sucks more about defending the triple option offense is the offensive line’s use of cut blocks. A cut block, for those who aren’t familiar, is one of the purest forms Satan himself can take in our world. According to scientific research the order is 1) religious extremists, 2) cut blocks, and 3) Florida-Georgia Line fans. Additionally, cut-blocks require absolutely no football knowledge or athleticism to perform. You can actually complete this scientific experiment on yourself to determine if you are athletic enough to cut block in a collegiate DI triple option offense:

Step 4: keeeeeep leaning (note: do NOT be tempted to reach out and catch yourself!!)

Ok time to analyze the results. Did you fall flat on your dumbass face like a fat sack of worthless potatoes? You did? Congratulations! You just performed a cut block! It’s literally that easy! As you might expect, performing this task repeatedly while in the immediate proximity of other people makes it likely that one of those other people’s knees or ankles will become injured at your expense. No worries, though, because who cares about the long term professional careers of guys much, much, much more athletically gifted than you, right?? Screw them!

Because of the mentality of teams who utilize cut blocks, FSU’s biggest worry on Saturday will be getting through the game as injury-free as possible. If they can prevent any more playmakers going down as the CFB Playoff nears, it will be a huge mental and physical advantage.

So in conclusion that’s the triple option offense in a nutshell, and that’s why is sucks so much to defend. It’s not tricky or gimmicky. It’s good old-fashioned football that has been around forever and been used to win many national titles in one variation or another. Conceptually, it is sound. FSU will have to be mentally sharp against it. The Bees or whatever they are will likely put up a pretty good fight against FSU. Soft factors, blah blah blah. However, the fact that FSU has the distinct advantage in virtually every single numerical and statistical and physical and mental and coaching category will likely lead them to victory.

Of course, none of this will matter if Jameis manages to kill every FSU fan on the face of the earth via heart attack by dishing up interceptions the way he has been. Seriously—dudes’s like the Julia Child of serving up interceptions this season—yeah, that’s a culinary pun. You’re welcome. Final score FSU 34 GT 21. 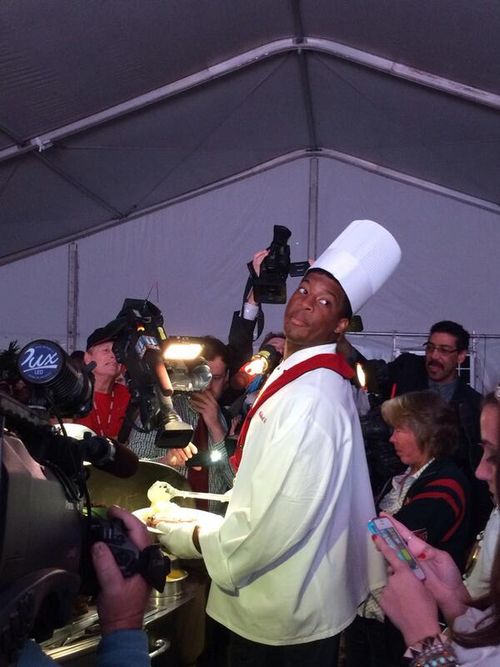