« Noles vs. Canes Roundtable: Or can FSU's defense stiffen up like Jimmy Johnson's hairdo? | Main | Keep Kelly But Hire a DB Coach? »

What Did I learn from the UM game? 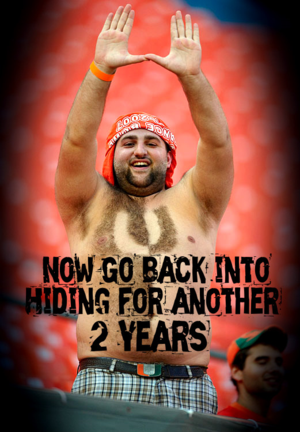 I do not care for the University of Miami’s football fans. This is nothing new, but if I don’t express it immediately I might have an aneurism.

Apart from their annual death threats to FSU fans on twitter and YouTube, their epidemically-prevalent lack of football knowledge, and the fact that most of them haven’t ever stepped foot on UM’s campus (“1000 feet away from a school” means 1000 feet, after all), the Miami Hurricane fan base managed to surprise nobody as they left half the stadium seats open. The ABC crew did a good job of masking it by repeatedly panning over a single section of the stadium that seemed densely packed, but don’t be fooled. For the single biggest “home” game UM has had in a decade, the fact that there was a single empty seat should have been embarrassing, let alone 40,000. UM fans are not football fans—they are simply anti-FSU. Sadly for them, that only sets them in regimentally-straight alignment with the rest of the college football universe. They feel entitled to talk inordinate amounts of shit, despite not being able to beat FSU in “their” own stadium since Brad Kaaya was in the third grade. Maybe they think of themselves as college football’s hipsters (“We hated FSU before it was cool” or whatever). Miami fans aren’t any different than those of Duke, or UF, or Alabama, or Notre Dame—they are simply less refined, football-ignorant versions.

I do, however, like UM’s football team a lot. UM’s football team looked good. I have a tremendous respect for the kids who bust their asses every damn day and wear the orange and green. It’s sad to me that they have to be associated at large with the types of folks mentioned above. That team deserves better fans. Freshman quarterback Brad Kaaya looked extremely good at times, making a few very aesthetically pleasing throws to the correct targets (against a decidedly average FSU secondary, but still). He seemed to move through his progressions well, and forced FSU’s DBs to play on their heels by having the wherewithal to throw directly into the blitz. He was not without his miscues and a misjudgment or two, but what freshman amongst us isn’t? On the night he would go for 316 total yards on 34 attempts, averaging 9.3 yards per completion. Conversely, Jameis would only account for 304 yards on 42 attempts.

Miami also was able to maintain possession very well, resulting in a roughly ten minute deficit between TOPs (UM-35:37; FSU-24:23). In my mind, FSU’s breadth of targets won them the passing game despite what the stats imply. Ten FSU players caught 25 passes from Jameis, while only 4 UM players caught passes from Kaaya. Having that kind of versatility through the air makes life very difficult for defenses, and prevents an offensive skill position corps from getting too worn out. UM’s defense appeared to be on the same page for almost the entirety of the game—something I can’t say for our guys. At first glance I thought it was purely miscommunications that cost FSU some early points, but upon further inspection it becomes evident that our DBs just got shook a couple of times by some very talented UM receivers. Also, FSU’s LBs were the victims of some good play calling, as a couple times they got teased to the strong side during pre-snap, only to find themselves drastically out of position when the play turned out to be a bootleg or when Kaaya exercised his receiver option over the middle. UM’s defense communicated early in the game and made the necessary adjustments. The UM DBs played very well in coverage also, shutting down Jameis and FSU’s receiving corps for most of the first half. They played like a team who wanted to sprint out of the gates and never look back—unfortunately for them the tortoise caught up in the end.

Cameron Erving and Roderick Johnson are very good. We have known this for some time now, but Saturday night they really put it on display. Cam’s only mistakes—a couple of lowish snaps—were to be perfectly expected, frankly. Playing center is one of the most difficult and technical positions on the field. In a way, the center is the quarterback of the offensive line—calling out adjustments, identifying blitzes and stunts, etc. The center is also one of the most pressure-filled and dynamic positions to learn, as a bad snap or two could easily cost your team the game. Despite all of this, Cam stepped up this week and played it like a pro, putting on a clinic in versatility and brainpower, not to mention the acute ability to actually block the opposing 300lb human running at him. On the whole, the offensive line played much better than they have of late, aided drastically by true freshman Roderick Johnson at left tackle. Johnson got some work with the first team at LT this summer and has proven himself to be an absolute brick wall in both pass and run protection. I can remember multiple plays where Jameis had a clean pocket for four or five seconds, and I would be remiss if I didn’t mention Dalvin Cook’s rushing average of 13.1 yards per attempt (2 TDs, long of 44). Finally, the backfield was protected and blocked for! Cam having the physical ability and intelligence necessary to direct his offensive compatriots is the leading reason for that.

Surprise, surprise: more of the same. In summation, I don’t think this game went any differently than we expected it to. Many people predicted a down-to-the-wire clash, and they were right. By now, FSU fans are impervious to the early deficits and the shoddy inconsistencies, and especially the onslaught of naysayers that accompany it all. It was business as usual for another nameless, faceless opponent.