Persistence Pays Off! A Look Back at FSU vs Louisville 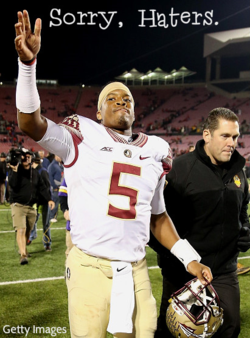 The country watched, specifically the SEC homers, praying to god we would falter. That wasn't the case. The Noles yet again, find a way to win. I can honestly say I've never seen a team as resilient as this one.  Here are a few takeaways from the game. The Noles must continue to get better with another strong defensive opponent in UVA coming into Doak next week.

Let's get the negative stuff out of the way first:

• As many good play calls as there were, there were some godawful ones too. Zone read with Karlos from the one yard line..."Come on Man!" How about the call on 3rd/4th and inches from midfield? I know you have a green center but you have to at least try to run the sneak once.

• The defense is awful and it starts with coaching. Yep, I said it. I know we are thin, I know we are young and I know we are injured. Having said that I'm tired of hearing excuses. We have too much talent in the secondary and two great lineman in Edwards Jr and Goldman to be struggling this much. Schematically it's a disaster, you have to utilize your strengths and we just aren't doing that. Our base set is nickel with two undersized linebackers in the box against power run teams. It just doesn't make sense. I was against the internal hire of Kelly and I still think it was a huge flaw not taking a national search for the best DC that $ could have bought last year.

• The Cook is in the kitchen!  Dalvin Cook is spectacular! He is the total package and he showed that the Syracuse game was not a fluke. He is living up to his 5 star ranking as he continues play solid ball. He has speed, hands and an ability to break tackles at only 190 pounds. Keep feeding him the rock, Coach, Cook is the future.

• The Numbers Don't Lie - 574 yards and 42 points on the nation's best defensive team is a massive success. No one thought this was possible. The haters are silenced once again.

• Thursday Jinx No More! - Fisher is now 3-1 on Thursday night and Seminole fans can rest assured that the Jinx is gone. He has come through nicely coaching teams to victory despite facing adversity.

Get ready for another great game this Saturday in the Doak. Look for the Noles to continue improving as they search for their 25th victory in a row.