« Parity, Revenue, and College Football | Main | What Did I learn from the UM game? »

Noles vs. Canes Roundtable: Or can FSU's defense stiffen up like Jimmy Johnson's hairdo? 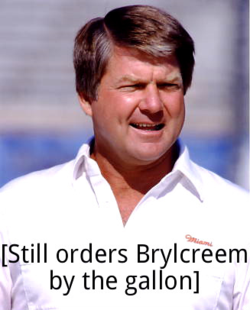 Our distinguished panel of Nole pundits and prognosticators tackle some of the questions that no doubt have been running through your mind as tension builds toward Saturday night when toe meets leather.

What can FSU do on D to contain Duke Johnson? Also, can we afford to dial up some corner/safety blitzes and trust that the front 7 will keep him in the first and second levels?

Steve:  I think we will see a lot of early down blitzes to stuff the run and keep Duke Johnson out of rhythm for as long as possible. The longer we keep him from getting into a groove the better. I also think we will call on Jalen Ramsey to shadow/spy on Duke Johnson the majority of the game as he is the best to cover Duke matching up size and speed with the explosive back. Look for many linebacker blitzes as well as DL stunts up the middle to prevent Miami's offense from running up the gut as most teams have done to FSU so far this year.

Teddy H.:  Whether or not FSU can contain Duke Johnson will be one of the biggest conundrums of FSU’s season. If they aren’t able to pull it off and keep him to under 125 yds or so on the ground, it will be a long night for the FSU D. Likewise, shutting him down would effectively shut down the entirety of Miami’s balance on offense. Putting so much of a team’s offense on one player’s back means that if FSU can contain him, Miami won’t be able to move the ball consistently and pick up the short to medium yardage they’ll need on 2nd and 3rd downs. A promising piece of news in this regard revolves around the MEJ/Ereck Flowers matchup. Even if Flowers starts, it will be his first game back and MEJ will have a distinct advantage. On the other side of the line I could picture Jimbo using Lorenzo Featherston to get some backfield penetration and try to establish a consistent pass rush. However, this is all contingent on the interior of the line and the backers being able to show that they can play hard and avoid the big mistakes.

Wall St. Nole:  There certainly has to be an increased sense of awareness when Duke is on the field. I think the focus has to be wrapping up tackles and holding the edge. In last year's game, before getting injured late in the 3rd quarter, Duke was having a good game but didn't have any huge runs or TD's. The Noles were already up 21 at the time of his injury so they certainly accomplished containing him. This year may be a different story though as he is better and our defense has an entirely new look with new faces. If we can limit big plays and get momentum on our side we certainly have a great chance to mitigate "the Duke".

Old School Nole: Contain Duke? Uh, taser him? Secretly spike his Gatorade? Seriously, I think Duke will get his yards (unless he's injured like during the 2013 game). The guy has over 1200 rushing yards so far (no. 2 in the ACC and seventh nationally) and is the Canes' third leading receiver. Smarter would be to try taking away the pass by pressuring freshman Brad Kaaya with the kind of rush the Noles applied last week — while slowing down Johnson with an extra emphasis on stripping the ball.

Should Jimbo scheme unexpected offensive wrinkles as he did for Louisville, in particular the play action pass to FB Freddie Stevenson that scored the final TD?

Wall St. Nole:  Yes, I think so. I would not be surprised if we finally see a trick play or two. On top of that, I always enjoy the complexity in Fisher's game plan. It is really different week to week and that's why it is difficult to stop. We've had successful plays for 10+ yards called only once or twice in the first 9 games. Nothing will be off limits and I see the offense moving with ease against this Miami D.  I would imagine we will see more of the screen game (we have hardly thrown a bubble or tunnel screen in the last 2 games) come back into play with Miami running deeper coverage. This plays right into FSU's hands as they have no problem nickle and diming down the field.

Teddy H.:  I think it’s in the best interest of the team for Jimbo to have some new wrinkles on standby for UM, so yes. I especially liked the Freddis Stevenson call, because he has been anything but a receiving threat during his FSU career. However, if I were Jimbo I wouldn’t deploy any wrinkles too readily. Before he does anything too unusual, I’d like to see Jimbo use some different tactics to get the ball to the outside, where we can attack the CBs, who (if we consider last year) should be giving some cushion to FSU’s young star receivers. If this is the case, I think the best options are swing passes, WR screens, end-arounds, or even use the TEs in the flats with some shallow crossing routes (slow-developing, strong sideàweak side progression) or peel routes (quick developing check down, weak side formationàweak side sideline progression). Once UM gets comfortable defending the edges, hit ‘em hard with the tunnel screens we’ve seen work so well this season.

Old School Nole:  Love the sound of all that, so I'll just urge Jimbo to go against tendencies the he's established throughout the season. That doesn't mean trick plays as much as stuff UM hasn't seen — like the TD pass to Stevenson against Louisville. Or those quick outs to Cook along the sidelines in the same game. Bottom line: Keep the Canes defense off balance and guessing.

Steve:  I do not foresee FSU getting their running game going early and often therefore they will not go to the play action very much except for third and shorts and goal lines. Miami is a very aggressive defense that thrives on taking risks and forcing turnovers. The key to keeping them honest will be to execute tunnel screens as well as bubble screens on the outside. We have to be able to spread out the Miami defense and make them run sideline to sideline to keep the pressure away from up the middle. Another wrinkle I think Jimbo will implement will be using the no huddle more often in this game.. This also does not allow a defense to run a complex scheme, they have to stay more to their base schemes and match up body for body.

Every game Miami has won this year, they've given up less than 120 yards rushing. Will they take Karlos Williams out of the game plan and stack the box to try and make recently turnover-prone Jameis take control of the game?

Steve:  Miami is going to stack the box and put pressure on Jameis all day. He has thrown 5 interceptions the past two weeks and they expect to force some turnovers as well. They will blitz and put pressure on Hoefield and the interior until they prove they can protect Winston.

Wall St. Nole: That is certainly a glass half full statement. They have played 2 spread offenses in UNC and Cincy along with other powerhouses including FAMU and Arkansas State.  You could also say that in Miami's losses they have given up an average of 264 yards on the ground. If they were to walk safeties up and try stacking the box it would be an early Christmas present to the Noles. FSU would love the idea of going one on one with these Miami DB's. Remember, Fisher has always been pass first. The run sets up the pass and if Jameis get's in rhythm it could be a successful night.

Old School Nole: Let 'em. FSU's running attack may be in its best shape in a couple of months if Austin Barron is back at Center and close to 100%, along with Mario Pender, Dane Cook (hopefully) and Karlos — all with different running styles. At worst, I think the Noles will present enough of a ground threat that  Miami can't blanket Greene, Wilson, O'Leary, etc.

Predictions from Teddy and Steve TBA