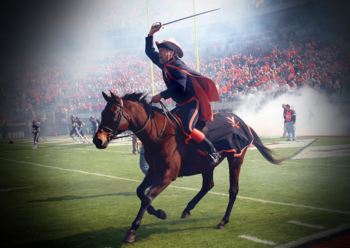 2011 was not the year to remember. After losing to Wake and Clemson on the road, the Noles rattled off 5 wins in a row only to have their dreams shattered by UVA.

We all remember that night (Lowlights here if you can stomach them). We waited helplessly praying that the replay official would rule an incomplete pass so that D Hop could have a chance to win the game. When the ruling was incomplete, everyone was relieved thinking we would escape despite a sub par performance. Right on cue D Hop misses the kick. I was done! I was done with Jimbo Fisher and I stopped buying into his philosophy.

Fast forward 3 years and we are now defending national champs with arguably the top coach in America. We have come a long way from that November night. One of the great things I like about this team is that they never overlook an opponent. Despite being 19 point favorites, the Noles will have to contend with a strong defense and a successful running game in UVA.

Relax, Jameis - One of my favorite series in the Louisville game was the three straight swing passes to Dalvin Cook. It was simple and effective. We have got to be more careful throwing into coverage and eyeing down receivers. At times, keep it simple and reduce the INT's.

Pressure! - We have to find a way. With a healthy LB core would they consider going back to the 3-4 and getting out of nickel? As good as the safeties and DB's are for this team they have not proven to be effective on the blitzes. We must continue to figure things out and get a pass rush going.

Stop the Run - Kevin Parks is a gamer. He could easily have a big game if FSU loses contain. Keep an eye on him and force UVA to use other options out of the backfield.