« Eagle in Atlanta predicting B.C. will shock the world Saturday at Doak | Main | Noles vs. Eagles Roundtable: Trap game or FSU learns the meaning of the word "Control"? »

Ballin! FSU Hoops Back in Action 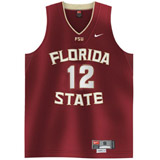 The Noles are two games into the season and are ready to make some noise. With new faces and a renovated arena, FSU has an opportunity to break the recent slump and get back to the tourney.

If you have listened with a close ear, you may have noticed some frustration in the past 2 years. Despite winning the ACC championship in 2012 the Noles rattled off 2 years of average recruiting ( a rarity for Hamilton). On top of that, they were plagued with youth, injuries, and turnovers.

The 2014-2015 season could be FSU's chance for redemption. The TLCCC is rocking with with a fresh look and the young players seem to have developed quickly. The Noles currently sit at 1-1 with a tight loss to Northeastern on Tuesday. Here are some quick hits and notes for the season.

Ham and Bacon, please  My best pun of the year! Hamilton has secured 5 star forward Dwayne Bacon for next season. Hamilton has always had great success with 5 star blue chips like Singleton, Snear, Albi and others.

Montay is out of the Dog house!  If you have watched even a slight portion of the Noles first two games you will see a noticeable difference in Montay Brandon. The combo guard/forward has struggled more than expected in past seasons. This year he seems like a different player. He has mastered the Euro step and is driving strong to the basket, using the glass well.

Guard the 3  I don't want to get too negative but I've closely watched every FSU basketball game in the last 6 years (thanks, ESPN3). The one thing I'll never understand is why we don't guard the 3 better. It's coaching and philosophy. The idea to protect the square and give up at times lower percentage outside shots only works against some teams. We bring help-side D to an entire new definition. I really hope FSU works on this. The loss to Northeastern should be a good reminder of what not do.

Fresh faces  Tuesday's game saw the long awaited arrivial of Xavier Rathan-Mayes or X man as I will now call him. Man is this guy smooth. He was the highest recruit in the past 2 years and looks poised to be a contributor. True freshman Phil Cofer may be the most impressive in the first 2 games, but guards Robbie Berwick and Dayshawn Watkins (not the Clemson QB) seem extremely comfortable with the offense and are already contributing and competing for playing time.

Before the B.C. game starts this Saturday check out the Noles in Action against Providence. Tip off is at 2:30 and available on ESPN3 and the Seminole Network.