Louie-Vul going Gray for Thursday night showdown with the Noles 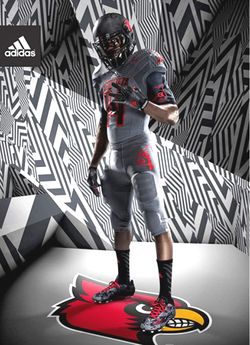 The Cardinals have launched an early pre-emptive strike against FSU — at least in the fashion department. Petrino's boy's will come roaring out of the tunnel in menacing...uh, gray.

After wearing black against Miami earlier in the season, Louisville has chosen the Adidas designed "TECHFIT" uniforms for the October 30th game at Papa John's Cardinal Stadium.

Louisville's media release elaborates: "Themed 'Showtime,' the threads are mostly gray with red elements, including the old English "L" and helmet logo. The jerseys are also highlighted by camouflage on the helmet and matching shoes.' (Ralph Lauren couldn't have said it better).

So will FSU respond with a unique uni statement of its own? Is there a funky/fashionable road design in the Noles' Nike wardrobe?