This Juice Ain't Worth the Squeeze 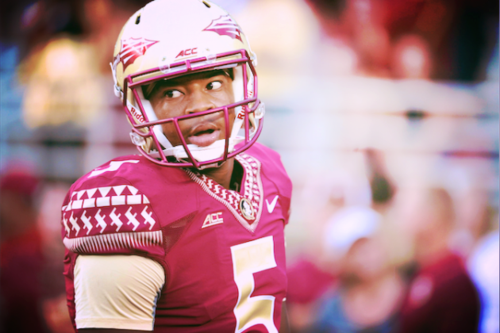 I can't speak for the other ChantRant.com contributors, but as the editor of this esteemed blog, I feel compelled to once again let you know where I draw the line in the sand...

I no longer support Jameis Winston.

Remember a few weeks ago when, after a frustratingly close victory over Oklahoma State, Jimbo Fisher commented that "Your actions speak so loud that I can’t hear what you’re saying?"

[Note, according to Jared Shanker, the above referenced quote is a "tried-and-true Jimboism." Not quite. Those words actually belong to Ralph Waldo Emerson, you know, the writer and philosopher.]

Jimbo made those remarks after hearing certain things from his players but seeing them do something different.

Sounds like we have a new team mantra.  All talk.

Yes, this team is all talk.

When is the team going to hold itself accountable for its actions?  When will its actions speak louder than words?

In the case of Jameis Winston, no time soon.

I'm done being a Jameis Winston apologist.  This juice ain't worth the squeeze... it's completely sour.  Last year's team was special for reasons beyond Jameis Winston.  It was a special blend of talent, coaching, opportunity, luck, and leadership.  Jameis Winston was but one piece of that equation but not an irreplaceable piece.

Winston's rap sheet is long and getting longer by the infractions that we know of.  But how can you be so ignorant to utter the most of profane of words.

Show some self-restraint, you know, like the rest of us.  While we are all out in the world trying to make ourselves better, Jameis Winston is trying to pull off the greatest of magic tricks.

He tried to show us a changed man.  A man who learned from adversity... albeit adversity he created entirely for himself.  A man who has grown and matured to understand right from wrong.  He had me fooled.  The wool was officially over my eyes.

But when it came time to perform his greatest of tricks, he had no rabbit to pull from the hat.  Not only is Jameis Winston empty-handed, but this time, the trick is on him.

I'm convinced that this team can win as many games with Sean Maguire that we can with Jameis Winston.  Winston is, without a doubt, a special and unique talent.  But he has, time and time again, lied to all of us.  I'm not willing to be a pushover anymore.  My line in the sand has been drawn.  I'll walk the tightrope and find a way to support this team without supporting Jameis Winston.  I personally hope that Sean Maguire has us winning by 3 touchdowns and gives Jimbo Fisher enough food-for-thought that maybe we're better off without Jameis Winston.

Does the team still support Jameis?  Probably.  But maybe they feel as betrayed as we do.

The things he shouted should never be shouted.  All it required to avoid that situation was one iota of self-restraint.  He's not even capable of that, however.

So why is it fair that we still support him when he can't even muster the effort to show us he's moved past his laundry list of infractions?  He hasn't shown his peers much respect and that's a character issue.  Winston can sure overcome this, but it won't be anytime soon.

As Ralph Waldo Emerson so artfully expressed, "what you do speaks so loudly that I cannot hear what you say."  Jameis, stop talking.  We don't want another empty apology that will only be broken several weeks or months down the line.

People around you have bent over backwards to help you.  When you're ready to help yourself, let us know.