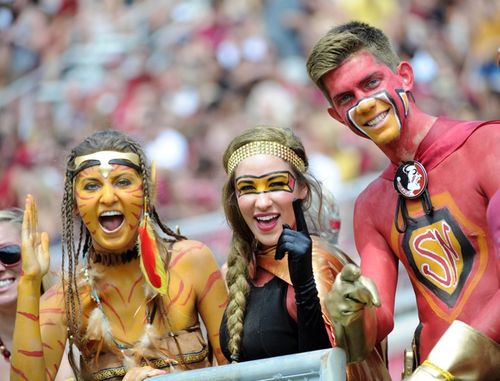 You are going to have to forgive me.  I went to Florida State during some of the darkest of days; I became accustomed to strange games and sour outcomes.  You'll have to forgive me for fearing the worst come Saturday.

Last night, Texas A&M won a game that most expected South Carolina to win.  South Carolina, picked by many to make a rise to prominence, looked flat and unprepared.

I wouldn't expect a Florida State team coached by Jimbo Fisher to be unprepared but I am legitimately worried about their state of mind.

All week we've heard that Jimbo Fisher has been telling his players to not chase the cheese.  Don't become rats.

[Note: last year, it was about finding the crumbs and doing the little things to win games.]

I don't know why, but I am going to be skeptical until I see the team play on Saturday.  Can they avoid their own hype?  Can they find a way to insulate themselves and focus on the task before them?  I sure hope so, but I think Florida State fanatics need to temper their expectations.  Winning a championship in back-to-back years is almost unheard of.  Winning a Heisman award in back-to-back years is not quite unprecedented, but hasn't happened since Archie Griffin.

It's probably in my nature.  I'm a cynic by nature, hardened by years of watching an offense run by Jeff Bowden.  I understand that those years are firmly in the past, but it doesn't mean that I have learned how to overcome the stigma of those oh-so-painful games.

Oklahoma State has to be smart and fearless if it has any chance of winning.  Remember that Oklahoma State has routinely been a top-10 team over the past few years.  They clearly have talent and the coaching to surprise Florida State... that is, of course, if Florida State is already overlooking this game as a mere stepping stone to the meat of its schedule.

Saturday will go a long way toward solidifying, in my mind, what kind of season is before us. We could very easily be staring another championship in the eyes.  But we could just as easily suffer the hard fall that South Carolina took last night... South Carolina underestimated its opponent and didn't come fully prepared to play and it cost them.

So, forgive me.  I won't be rah-rah until I see this team on the field.  This team is going to have to work very hard to repeat what it accomplished last year.  As a team, Florida State started settling on big plays later in the season.  I worry about whether we are going to see that same team... a team full of confidence, but not entirely focused on continuing to pick up each little crumb.

Afterall, why chase crumbs when you live in a block of cheese?