What to Expect When You're Expecting (another championship) 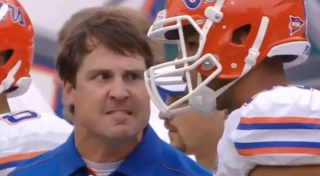 Championships are like babies. More accurately, winning a championship is like a snapshot of a baby. A dusty old polaroid of your former self, wrapped up in the arms of adoring parents is akin to a coach being presented with a championship trophy. It’s a fleeting moment in time, one which stirs deep emotions and which we know wont last forever. My dad always told me that a man is allowed to cry during two occasions in his life: when his team wins it all and when his children are born. Obviously what is ultimately a hunk of metal or glass is not worth the same as a human live, but championships are certainly more rare to come by. After all, more head coaches will go on to have families than will ever summit the mountaintop of their chosen sport. This season, Jimbo will set sights on a goal which few have attained before, and one which we as a fan base have allowed ourselves to expect from him: back-to-back Championships. Use this handy guide as a reference tool during what will undoubtedly be an emotionally taxing endeavor.

1) Expect the media to be a bunch of assholes.

FSU fans learned last year that national media reporters can get away with being only half accurate at best and still keep their jobs.  This was a tough lesson to learn and deal with because it will undoubtedly have reverberations that last many years into the future. They have the power to create reputations as well as taint them, and we got to see that process in full effect. Here’s the kicker: this year will be no different. Pundits like Paul Finebaum will continually spew asinine word vomit onto the airwaves, pandering to his SEC fan base in a poorly orchestrated attempt to diminish whatever splendor FSU manages to attain this season. ESPN “analysts” will still make snide and cutting remarks about Jameis. They will still misquote him and analyze and overanalyze every movement, every word he says, every step he takes on his road towards college football immortality.They'll ignore all of his community service, his hospital visits, and his mentoring efforts. This is how they work. This is how they make a living. Expect this type of nonsense and, in fact, drink it in. Learn to love it. Learn to laugh at it. If they get under your skin, it’s only because you let them.

2) Expect a close game or two.

Believe it or not, close games can be fun to watch. I know that’s easier to say when our boys in garnet aren’t currently engineering a comeback victory or some other similar feat, but it’s true. FSU has had the luxury of winning the last 14 games by an average margin that could (and should) incite fear in the hearts of opponents. With the target now squarely on our backs, and the addition of a 4-team Playoff, it means that a) every team we face will be giving us their best effort, and b) the nation’s most talented athletes will be allowed to go head to head with one another. This is good for the game, trust me. Whoever wins the Championship trophy in 2014 will not do it by outscoring their opponents by 30 or 40 like FSU fans have grown accustomed to. These close game scenarios are precisely when the coaches and players need our support the most, so under no circumstances should you a) panic, b) lose faith, c) become a cynical jerk, or d) all of the above. Remain calm, trust in the team, and trust in the coaches.

3) Expect all of the “hot takes” on social media.

At some point this football season, it is an irrefutable fact that Twitter will collapse into a burning, gestating mass of incoherent hillbillies attempting desperately and unsuccessfully to argue their point of view on a topic. This uproar will undoubtedly be the result of a poorly researched or otherwise inaccurate national media story (see #1). In fact, it might be entirely based on media speculation, which is an industry term meaning “we are terrible at our jobs”. Furthermore, Facebook and other social media outlets will begin to cause you anguish, as everyone you knew in high school miraculously becomes a lawyer, or a doctor, or a social ethicist, or what have you. At any rate, they will all develop the expertise of a professional in whatever field is necessary to conceptually understand and interpret whatever scenario might be arising. Furthermore, they will all master the metacognative abilities necessary to conceptualize thier opinion against a larger, ever-evolving background. Oh-- and most importantly, should you voice a dissimilar opinion of the scenario, you will be wrong. That’s just the way it goes. Why? Because they are right. And you are wrong. Simple, isn’t it?

It is best, during these trying times, to concentrate on what you can control and whom you choose to maintain contact with. Try your hardest to understand that, statistically speaking, 99.999% of all opinions on earth are grounded in insufficient research or comprehension. Don’t hold it against them, and hold yourself to a higher standard.

4) Expect Will Muschamp to completely lose his shit.

This is my favorite part of watching the FSU/UF rivalry game each Thanksgiving. No matter what, whether the Gators are winning by 10 or losing by 50, Will Muschamp puts on a show. His patented rage faces and sideline antics are akin to what Napoléon Bonaparte must have looked like after succumbing to the Anglo-Prussian forces in the Battle of Waterloo 199 years ago (history is fun, kids). The way he stomps around and yells and frowns really hard reminds me of a four year old who wasn’t allowed to go in the ball pit after a hasty lunch as Mickey-D’s. In times like these you must drink it in and appreciate that we have a grown up for a coach who is capable of acting as such.

5) Expect Brent Musberger to make a comment implying something illicit or inappropriate.

This is just something he does. Don’t hate him for it.

6) Expect “Tha U”’s fan base to make utterly insane predictions about their season.

Here’s a fan base, or “e-fan base”, rather, who I must seriously sometimes question whether or not any of them have watched a game of football that took place post 2001. I wish this was an exaggeration in any capacity, but it is not. I’ve watched them predict, over the past decade or so, how their team “will shock the world and win a National Title in 2002 2003 2004 2005 2006 2007 2008 2009 2010 2011 2012 2013 2014”. On the whole, Miami Hurricane fans are some of the most out-of-touch, uninformed, baseless, arrogant sports fans I have ever encountered. They are the definition of “fair weather fans”. And what’s worse is I mean that as a compliment. It must take a well-orchestrated effort across many methods of communication to remain so universally bigoted and unwarrantedly aggressive. It’s kind of impressive, really. However as fans of a relevant program we must remember that they have been through a whole lot of sad times and deserve a bit of latitude in this regard. We must let them huff and puff, and we must then blow their house down. That’s how it goes, right?

Conversely, if you can manage to track down a Hurricane fan this season that can make informed judgments about their team and is willing to engage in thoughtful, well-articulated conversation about their program, you have made a friend for life. These folks are typically the ones who have actually attended UM, too. In this regard, expect to be pleasantly surprised. If you ask me, there is a level of underlying respect between FSU and Miami that does not exist between FSU and UF.

If you are lucky enough to live or work in Tallahassee and can subsequently attend a FSU game at your slightest whim, DON’T BE A JACKASS AND LEAVE EARLY. I don’t care if FSU is beating Southwestern Methodist Seminary for Girls by 70 points and its 107 degrees and you’re already hungover. You have the opportunity to watch the best program in the country and one of the best collegiate quarterbacks in history. Be a sponge! Soak up every single detail and every play and watch how every receiver cuts beautifully upfield into the zone’s crease and pinches the ball out of the sky as effortlessly as a bird of prey. Football is poetry that lives and breathes, folks. It is a truly beautiful game that FSU and FSU alone has mastered. Observe and commit to memory how amazing the fireworks look at night when we score a touchdown, and recollect in your mind’s eye how imperturbable the resulting smoke looks as it dissipates lazily cross the field. Close your eyes and listen to 83,500 people do the Warchant and sing the Fight Song. There will come a day, if you’re like most of us, when you’ll be lucky to catch one game a season in Doak Campbell Stadium. When the notion of proximity breeding indifference becomes all too common, it’s up to each and every fan to swim against that current both individually and collectively.