« Three's a crowd and thoughts on D'Vontrey Richardson | Main | Jesus Wilson is still suspended, but practicing... » 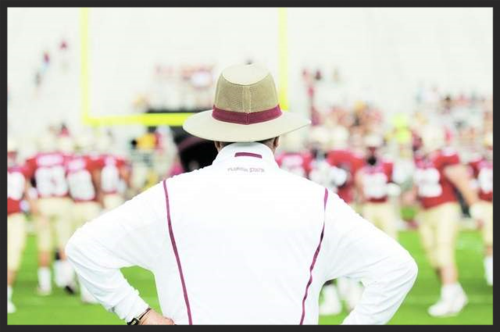 Regardless of your thoughts about yesterday evening’s NFL Hall of Fame Game, and specifically regardless of your feelings about whether or not “real” football was being played, there exists a plethora of reasons why it’s important that we as FSU fans appreciate games like the one some of us watched last night.

Most notably, last night's game marked the culmination of a week in which two former Seminoles  were forever enshrined in the Pro Football Hall of Fame. With the additions of Derrick Brooks and Walter Jones, FSU doubled its Hall of Fame inductees (Deion Sanders ’11, Fred Biletnikoff  ’88). Two of the most prolific defensive personnel to ever take the field at FSU, Jones and Brooks would go on to play in a combined 404 professional games and rack up 20 Pro Bowl appearances.

Their accolades on the field speak volumes to their athleticism and knowledge of the game, but what I found myself most intrigued with as I watched them make their induction speeches and take interviews with reporters was everything they spoke about that had nothing to do with football. They spoke about how fortunate they had been—not because of their individual efforts—but because of the many positive influences in their lives. Wives, children, friends, coaches, and other team members all contributed to each of their remarkable careers.

What I found most inspiring as they continued to talk to the media throughout the week was the frequency with which they attributed their time at FSU to having a significant impact on their time as a professional. Despite having never played a down together in Doak Campbell Stadium and over 2 decades since Brooks helped the 1993 squad bring home FSU’s first national title, they remain great friends and loyal Seminoles to this day.

Brooks was not shy in saying to one reporter “[Jones] was the first guy I hugged when I got in that room in New York (for the announcement)”. They spoke openly about the tenacity and defensive prowess instilled in them by legendary Defensive Coordinator Mickey Andrews. Indeed they praised the entire FSU community and fan base. They described the process of growing from boyhood into manhood with the help of their parents, advisors, coaches, and spouses. And, naturally, they heralded Bobby as the single greatest college football coach in history.  I remember being thankful that FSU can lay claim not just to a couple of outstanding football players, but to two exceptional human beings. They had grown from football players into husbands, fathers, businessmen, philanthropists, community organizers, and political activists.

If you’re an FSU fan of any age, appreciating the men who built the program from the ground up is worth your while, to say nothing of it being in your best interest. FSU is lucky enough to be home to a football tradition that runs deep within our school’s psyche and permeates into the surrounding suburbs and farmland. I like to tell friends and acquaintances that not even the biggest FSU fan can truly know what FSU Football is until they have lived in Tallahassee. They always look at me begrudgingly and whatever they say back is usually dripping with skepticism. That’s fine with me, though. They call themselves a fan because they probably are. They’ve probably driven across the state and tailgated and attended a few dozen home games and heard the roaring of the crowd and watched Osceola plant the spear on the 50. They probably even know all the words to the Fight Song. While all that stuff is certainly nice, it’s also simply the culmination of where the program is right now, at that very moment in time. It’s a snapshot.

These men who were enshrined yesterday embody a highly exclusive subset of a Seminole legacy that stretches centuries into north Florida’s past. They are ambassadors for the FSU mantra wherever they travel in the world and they live by the values of Vires, Artes, and Mores every day they wake up. They are not simply very very good football players. In fact, they are what we should all be striving to emulate.

So, where does this leave us? What does any of that have to do with the first of several dozen bad football games that will be played before the “real” season begins? It’s simple. During all four quarters of last night’s game, on every drive and every snap, there were 22 men on the field trying to emulate guys like Fred and Deion and Walter and Derrick. On the sidelines, there stood roughly 150 more who all had the same goal in mind. I can guarantee you that every single one of them would kill for half of the skill, athleticism, or gravitas that was so graciously bestowed upon our four FSU enshrinees.

These guys—“the other guys”—they might come from another big university steeped in football tradition where they stood out magnificently on the field. More than likely, though, that was far from the case. More than likely they were fifth or sixth or seventh round picks who have been working their asses off since the end of their season last winter in hopes of earning a living. More than likely they have put more work into making a professional roster than any of us have put into anything we’ve ever done.  And, more likely than all, failure for them does not involve going home to a plush sofa and big screen TV and watching football for the next six months.

What you should do, though, is watch these games from the perspective of one of “the other guys”. Watch these games with great attention to detail because you will notice that somewhere on the field is a guy who is in fact playing his ass off. Somewhere on the field there is a DB springing 40 yards for a chance to make a key block or a receiver using extra special to perfect his routes, or a quarterback trying relentlessly to correct his throwing mechanics. Watch these games and try to see the expressions on the faces of rookies as they embark upon their first professional season.

Take note of the men who are still trying to make the final roster. Take note of their poise and their composure, and be fully aware that something they have been working for since childhood is on the line tonight. Watch these games and root for the guys with surnames you’ve never heard before and Al Michaels will probably mispronounce. These are the men who have most committed themselves to continuing the legacy of our very own FSU Hall of Famers, whether they know it or not.