The Morning After... Noles Avoid Upset 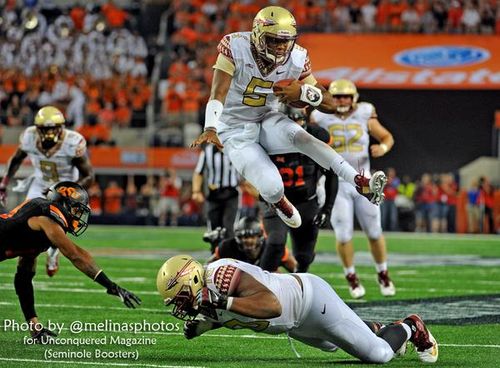 Most fans, understandably, had a hard time watching the game last night.

Last night was a reflection that this is a new season and a new team.  2013 is in the rear view mirror.  That team was special for so many reasons, but it's time for the 2014 team to write its own chapter and not live in the shadow of its predecessors.

We saw some very interesting things last night.  Oklahoma State created a lot of confusion for FSU's defense.  Jameis Winston targeted Rashad Greene way too often, making our offense seem one-dimensional.  Karlos Williams looked human and average.  The defensive line was pushed back throughout the night.  Our offensive line failed to make a push of its own.

Maybe there were mental errors, but in many ways, we just struggled with Oklahoma State.

Based on last night's performance, it might be time to reevaluate our expectations for this season.  We looked good at times, but this team suffered many of the shortcomings that prior teams suffered.  For example, most fans thought we were headed for a repeat of "NC State" 2 years ago.  A game where adjustments weren't made and leaders failed to lead.  Most fans have seen the script before and thought this game would play out like the others. What's troubling about that (i.e., the fact that last night's game resembled upsets from the past) is the lack of a killer instinct.  Somewhere between January and August, Florida State lost its killer instinct.  Was it left in Pasadena?

We also learned about the two next stars of college football, Tyreek Hill and Mario Pender.  Hill got a better opportunity to showcase his talent (and it's really, really special talent), but Pender made a name for himself by doing what Karlos Williams couldn't.

We also learned that the team had a bad week of practice (listen here to Mario Edwards describe it).  Why would a championship team have a bad week of practice in week 1?  They were caught eating the cheese.  They were caught in their own hype.  We previewed this earlier in the week, wondering whether Oklahoma State would surprise Florida State.  I hate being right.  I also hate being a cynic, as I wasn't ready to buy into the notion that 2014 would be a mere continuation of 2013.

Florida State, its players and coaches, have a world of work ahead of them and not much time to get it fixed.

The good news is that they have all the right puzzle pieces to have a very special team.  Many players besides Pender made a splash for the 'Noles.  I was impressed with what I saw from Travis Rudolph (running good routes and solid run blocking) and Reggie Northrup (being all over the field).  Christian Green emerged as a deep threat.  DeMarcus Walker looks ready to make an impact.

Last year, Florida State made its presence known to the world with a methodical slaying of Pittsburgh.  This time around, Florida State proved lucky to survive a gut-punch from Oklahoma State.  It's just the medicine that the doctor ordered, however.  A dose of reality.

It's a reality that the players easily absorbed, based on their comments after the game. No player looks concerned, they realize that the task ahead of them is to practice better.

It's hard to imagine why this team would have a bad week of practice, consdering how talented it is.  As you see, however, FSU is missing some of its leadership.  Players like Telvin Smith and Lamarcus Joyner kept the team focused.  We have yet to see which player is going to emerge and fill the leadership void. The question isn't so much whether this team can fix their issues in practice, but which players are going to lead the charge.

I'm going to finish with one final thought.  Remember back in 2008 when Florida lost to Ole Miss?  That Florida team was as talented as you're going to find.  They suffered a loss to Ole Miss, however, because they failed to focus.  They got complacent.  They got ahead of themselves.  Tim Tebow, as much as I hate him, did something that a leader does.  He took control of the team.  He re-wrote that team's destiny.  He delivered a great speech about what it takes to be a winner.

For what it's worth, I hate that I even had to write what I just wrote.  But it's true, all of it.  I'm not saying that we need a moment like that, but we came awfully close to losing last night.  It's a lesson that this team needs to learn from 2008's Florida championship squad.  They suffered an unimaginable loss to Ole Miss but then proceeded to beat everyone else in their path.  If Florida State is going to learn a lesson, they are going to need to look to take it from the team down south.