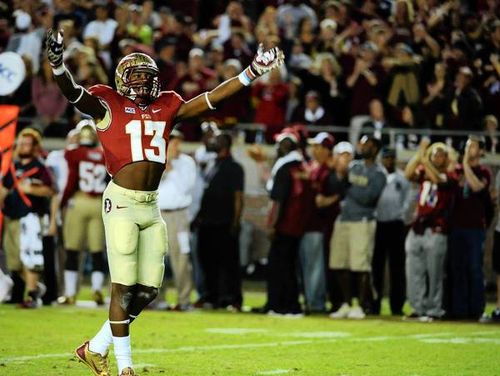 If you haven't been paying close attention, Jalen Ramsey was kicked out of practice on Sunday.  Ramsey was too rough on too many plays and played with fire.  Ramsey laid out tight end Ryan Izzo during a non-tackling period.  Ramsey knocked Karlos Williams down into the legs of Jameis Winston.  It was that final blow that saw Ramsey's exit from practice.

[By the way, what got under Jalen Ramsey's skin?  He had the best missed tackle in all of Florida State's history, so I hope he isn't dwelling too much on a missed tackle or two]

Immediately following practice, Jimbo Fisher questioned Ramsey's character and his leadership... and for good reason.  Fisher also went so far as to question Ramsey's future on the team... that it was Ramsey's decision as to whether he wanted to be at Florida State.

The incident proved two things.  First, we don't always like to know what goes into the sausage... incidents like this are routine for a program of Florida State's stature.  There are skirmishes and countless incidents that occur on the practice fields and in the locker room that no one will ever know about.  The average fan doesn't even care for those details--they want to know the bottom line: is this going to be a good year or not.  Events like these are so common and so commonly unreported that it is alarming when one of these events is reported.

Second, we re-learned that this is truly Jimbo Fisher's program and it's his way or no way.  Jimbo is the alpha and no player, no matter how good, is going to bend the rules.  How would have Bobby Bowden handled this incident?  Not quite like Jimbo did.  Bowden would have said something to the effect of, "oh, that's just boys being boys."  Bowden, surely, however, would have laid down consequences for insubordination but he would not have led on to the media that there is some serious breakdown in the relationship between a player and a coach.  Jimbo has come a long way, but he still has a little more to learn.  He has to find a filter.

Disregard Jimbo's comments following practice.  He was hot.  He needed time to digest what was happen... but one thing is clear, he doesn't like when the players don't follow directions.

This incident is notable because now, Jimbo has kicked the two best players on the team, both on offense and defense, out of practice for insubordination.  It truly is Jimbo's way or no way at all.