FSU asked fans to #AskJameis... what's the worst that could happen?

Somewhere in a conference room, someone suggested that FSU promote an #AskJameis hashtag on Twiter that would allow fans to ask Jameis Winston questions directly.

Somewhere before setting up that meeting, a person wrote an email or memo, presumably, justifying why this was a good idea.  For the life of me, I don't know how you could possibly have justified such a decision.  I'm sure the idea came from a younger employee, likely a recent graduate of the school, but it's Florida State's leadership that dropped the ball and failed to see the landmine they were creating.

Add yet another tally to FSU's list of public relations snafus (there are many) and this one invited the most backlash. 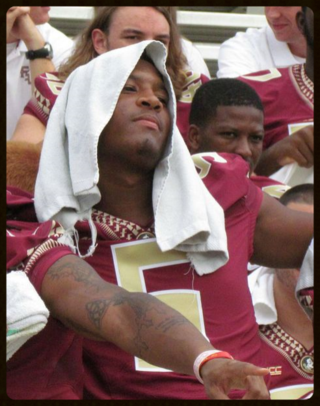 We are all aware that FSU has a history of not handling certain things like this very well, with "LogoGate" being one of the prime examples.  Unfortunately for FSU, the #AskJameis experiment is most likely Florida State's worst-planned media disasters.

From the get-go, the questions poured in at a rapid clip... thousands within the hour.  Most of them, we won't even bother to summarize.  Others were moderately funny, but still, there are only so many crab leg jokes in circulation.  Below is an example.

#AskJameis if the Publix employees at check out are in zone coverage and you're running a read-option with the crab legs, what do you do?

We can't even consider posting the majority of the questions, unfortunately, as the questions conflate Winston's off-field issues into one.  By the end of the day, I'd be surprised if FSU came away with more than ten legitimate questions or could even find them among the ten thousand inappropriate questions.

Let's take a deep breath.  I have a confession to make.  I have been trying not to point fingers in life, opting instead for a more "constructive" strategy toward fixing problems.  I am going to put that zen-like approach on the shelf for a moment and go back to my old ways (ohhhhh, old habits die hard).

Shame on Stan Wilcox and Jimbo Fisher for letting this happen.

Wasn't the social media ban supposed to be in effect?  Maybe it was player imposed, but I don't know why Jimbo Fisher, of all people, would allow this to happen.  Something tells me Jimbo Fisher didn't have much say in the matter (despite the fact that he should have been given more input) and so if he didn't, then this falls on the athletic director, Stan Wilcox.

Why subject your most popular player to this?  For all of the talk about "eliminating clutter," this event created a ton of clutter.  Florida State would have been better off having Jameis answer questions directly, on a microphone, and not subjecting him to the wrath of Twitter.  It wasn't pretty, it wasn't fair, and it should have never happened.

Why invite the Twitterverse to Tallahassee?  I still, for the life of me, can't figure out how this idea made it up the flagpole and why it didn't get squashed.

The good news is that all it takes is one practice to start eliminating the clutter... there are enough issues to deal with, especially those that are in house, such as Jalen Ramsey's insubordination, than worry about issues on social media.

The point remains, however, that it should have never happened.  Shame on our leadership for letting this one slip through the cracks.  The people that care most about Florida State and Jameis Winston are in Tallahassee... give those folks the access, not a bunch of random people on Twitter.