“Bouncing Around, Doing Some Good Things” 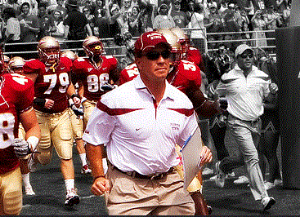 We are a week away from the start of college football. Below are a few thoughts and ramblings about recent updates for the Noles.

Jimbo appears to be taking even more caution than usual in an attempt to prevent fall camp injuries. Both PJ.. Williams and Ronald Darby have not practiced in over a week and a half. As far as we know, neither has any serious injuries and did return to practice today. Other notable hold-outs and blue contact jersey guys over the past week include: Cam Irving, Josue Matias, Nile Lawrence-Stample, Rashad Greene, Mario Pender, and Dalvin Cook.  To our knowledge, these guys have either no issues or have minor “tweaks,” as Fisher calls it.

Jimbo is epic in his art of warfare. His level of secrecy and information given to the media is meant to keep the opponent guessing, but is also out of respect for the players. When it comes to depth chart and starters, he typically keeps a tight lid even though many positions are obvious. I was surprised to hear him confirm last week in camp, that Lavenberry will in fact be the starting Mike linebacker. On the other end of the spectrum, I was equally surprised for him to give a negative review on the walk-on punter. Looks like for now, we still have Beatty! Jimbo also confirmed that he thought Pops (Christian Green) would be the #2 WR. More on this below.

Filtering out the Receivers

Chant Rant nailed it in an earlier blog about Christian Green filling in as a starting WR. We are still waiting on confirmation of the third. This may be something that could sort its way out after the first few games.  Chatter has seemed to shift from Haggins or Whitfield to more emphasis on Rudolph or Lane nabbing that third and final WR spot.

The depth chart is not the only mystery. In terms of defensive schemes, camp reports have suggested the Noles running multiple hybrid 5-2 defensive sets, with Mario Edwards dropping back as a LB in some formations. After last year’s switch to 3-4, I wouldn't be surprised with anything under first year Defensive Coordinator Charles Kelly.

**Thanks to Chris Holder for the picture!