« Changes are coming to ChantRant.com | Main | Remaining Receiver Spots up for Grabs »

August is here, the season is near...

The players have said their goodbyes on Twitter for a few months.  Their hiatus from social media will allow them to focus on the upcoming season, their studies, and their quest for another national championship.

As anyone with a smart phone knows, however,  away from social media is fairly impossible.  These players are followed by dozens of fans a day, messaged by friend and foe alike, and I just can't help but think that they'll have a hard time giving up social media altogether.  Prove me wrong. 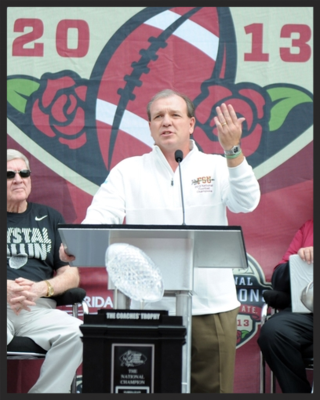 I can only hope, though, that the players are aware of what lies ahead of them.

If ever there was a team built to win a national championship, it's this one, the one that Jimbo Fisher built from scratch, the one with his fingerprints on it.

At his disposal?  A Heisman quarterback.  A stable of incredibly capable, explosive running backs.  A senior laden offensive line.  Safety valves and playmakers at receiver.  And that's just on offense.

But the issue for this team will be, in many ways, how do they react to their new surroundings?  How will they stack up against the expectations they set for themselves?

Banning social media is a good step.  But as we know, things like that are so much easier said than done.

And beyond the battle against social media and eliminating clutter, is the battle that the players will have with themselves... how will they react to their own success?

Florida State renovated its facilities.  Many of the players on this roster are responsible for the renovation.  Rashad Greene is still on the roster, yet got a prominent spot on the wall.  How do you keep your ego in check when there is a life size portrait of you on the wall?

It's kind of hard to eliminate clutter when the clutter is the result of your own success.

[And on a site note, have you eliminated your own clutter?  Such as declining social events through January and RSVP'ing no to those upcoming Fall weddings?  It's all part of the process.]

How do stay hungry when you have a championship trophy already in the room?  Well, hopefully, the coaches have instructed the kids that they have the potential to be one of the best teams in college football history.  If this season goes anything like the last, Florida State will find itself undefeated headed into post-season play... and if that's the case, odds are that Florida State will have to beat two SEC titans to win the championship.  Doing so will likely catapault this team into the conversation of "best ever."

Leading the team will be a once-in-a-generation talent by the name of Jameis Winston and to make history, he's the leader and the man for the job.   A championship is the perfect blend of players, coaches, and attitude.  All of those facets are part of a process by which Jimbo Fisher builds his program; the process, in this case, is a series of principles.  A way of handling your business.

If Florida State can handle it's own business, they'll have to add a few more life portaits to the wall.