« Championships sell tickets. | Main | Would you believe, Dabo is "proud of Florida State"? » 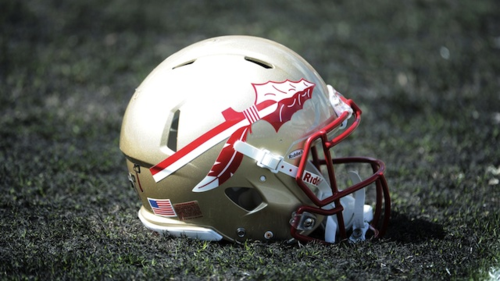 We have quite a few things to cover in what will be the first "grab-bag" post in a long, long time.

First up, Mark Schlabach covered the ACC this week and was asked about Florida State's chances of a repeat.  Here's what he had to say:

Even with Florida State losing so many star players from its national championship squad, I think the Seminoles are still in the driver’s seat in the ACC and should be in the mix to be one of the four teams in the College Football Playoff.

The FSU offense should again be very explosive, and it starts with Jameis Winston, the reigning Heisman Trophy winner. He has some nice weapons coming back in tight end Nick O'Leary and receiver Rashad Greene. What I really like about the FSU offense, though, is potentially having five senior starters on the offensive line.

I think the Seminoles’ biggest question mark is going to be on defense, but I’m not as much concerned about the talent as the leadership void. FSU lost some very vocal leaders inLamarcus Joyner, Telvin Smith and Timmy Jernigan. Plus, defensive coordinator Jeremy Pruitt left for Georgia.

For someone who doesn't follow the program all that regularly, this is an adequate response.  I believe he underestimates two things.  He is focusing on the passing game (naturally), but neglects to even mention Karlos Williams.  Or Mario Pender.  Or Ryan Green.  Or Dalvin Cook.  Pick your poision, there's plenty to go around.  Florida State will be running the ball a lot behind a senior-laden offensive line.  It should make what was already an effective offense a downright nightmare to play.  Winston has great field vision; we already knew that.  He has a more than adequate arm; we knew that.  But this will be Winston's second act (albeit a final, closing act).  If he can fully master it, the play-action pass will be lethal.

Schlabach also makes much ado about the leadership vacuum created by the recent departures.  He neglects to mention that we experienced a similar leadership vacuum the year prior.  He further neglects to mention that we lost a defensive coordinator the year prior, as well.  Last year wasn't supposed to be the year; it was filled with many of the same questions (i.e., how will the new coaches perform, which players will emerge as leaders, so on and so forth).  Schlabach has no idea that this year's defense will be better than last year's squad.

Second, we learned that FSU is unlikely to visit the White House.  According to Head Coach Jimbo Fisher, I've heard that it was a matter of scheduling:

“We’re trying. It looks like it’s going to be hard because all the pro players are going, coaches are going on vacation,” FSU coach Jimbo Fisher said. “We’ve tried to give them a thousand dates, but we couldn’t get it worked out.”

A few weeks ago, I heard a different story.  I heard that FSU is not making the trip because of money; it costs quite a bit of money to ship and house its players in D.C.  FSU is also in the process if significant stadium renovations and every penny counts.  Is forgoing the trip to D.C. worth the loss of positive exposure?

Third, FSU is still in the process of finding its next President.  I wouldn't go so far to say that the search for a new President is a disaster, but it has suffered quite a few missteps.  A major stumbling block was the apparent favoritism shown to Sen. Trasher and his candidacy.  Many candidates refused to even compete.  Now, however, it's anyone's game.  Some of the decision makers are even trying to slow this process down for an entire year to make sure that they get the right candidate.  I'd argue such a delay is unnecessary--you'll know who the elite candidates are and hopefully we can find someone to fill the void left by former President Barron's departure.

He's probably in such a good mood coming off a national championship and bringing in an elite recruiting class with all players making it to Tallahassee.  That's right, all players have qualified.  It just goes to show that we're winning not just on National Signing Day but also on the other days that matter, like the day that the players have to report to campus and on Saturdays.

It makes me think that maybe Florida State needed to reach the depths of mediocrity so that the program could be re-built exactly the way a coach would want it.  In this case, Jimbo Fisher was able to start laying the groundwork on day 1.