It's only June and FSU has now sold every 7-game package available.  This is the first time Florida State has sold out its season tickets since 2003.  96 percent of last year's season ticket holders renewed their tickets for this season.  Moreover, more than 3,000 new season ticket packages were sold.

Of course, the six game package is still available (North Carolina, Clemson, Notre Dame, Virginia, and Boston College).  Just the Clemson and Notre Dame games alone should guarantee the six-game packages being sold out as well.  It's only a matter of time.  The package is $240, which, again, is reasonable for Clemson and Notre Dame alone.  If reading this makes you reach for your wallet, then click here and buy your season tickets!

The only dynamic in this static world is... a national championship.  Oh, and a returning Heisman award winner.  It's true: winning is all that matters.  Winning puts butts in the seats.  Fancy things like WiFi will do little to bring the fans to a game; it just makes for a better experience for those that make it to the game.

It has been since 2003 that Florida State has sold out its season tickets.  2003 is also the year that discontent with the direction of the program began mounting.  While many of the fans heckled Chris Rix, a lot of the blame really needed to fall on the shoulders of Jeff Bowden (and ultimately, it did, in 2006).  Because of the discontent, fans were no longer lining up in droves to watch their beloved Seminoles.  By 2004, the wheels really began to fall off; the program was no longer anything what it once was.  It began the troubling trend of losing to vastly inferior teams like Maryland.  It culminated in an embarassing loss to a bad Florida team; Jeff Bowden's offense could only muster 1 third down conversion on 15 tries.

Thus, it should come as no surprise that this is the first time since 2003 that Florida State has sold its season ticket allotment. Times have changed. Dare I say, the dynasty is back.

In fact, things are so good in Tallahasse, that the school is planning a considerable amount of renovations to the stadium.  It's a good investment in its future, seeing as, now that the on-field product is elite, most fans will start griping about other issues, such as the quality of our facilities. 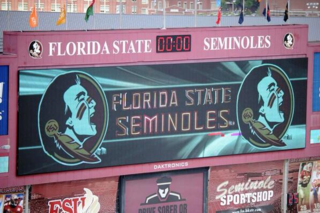 It's no secret: Doak is in need of a makeover. For as beautiful as Doak is from the outside, it has deteriorated on the inside.  Massive changes are coming.  The South endzone will feature two tiers (meaning that entire side of the stadium will be demolished).

Apparently many of these changes are being modeled after Bryant-Denny Stadium, home of the Alabama Crimson Tide.

But the bigger question is: where is the money coming from?  Well, as we saw this year, fans and boosters alike are spending money on Florida State again.  It's a great time to be a 'Nole.

Contrast that with what's happening at Miami (and no, this is not a joke):