« Would you believe, Dabo is "proud of Florida State"? | Main | Wally Woodham and whether a two-QB system can thrive at Florida State »

Adapt or die; Jimbo's got satellites.

Jimbo Fisher is making the kind of program that other coaches can only dream of having.  Sure, Jimbo Fisher emulated Nick Saban and Bobby Bowden, but FSU's success is Jimbo Fisher's handywork and no one else. 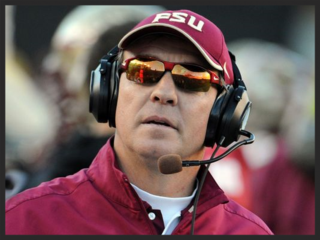 So what exactly are we talking about?  Satellites.  This week we found out that Jimbo Fisher is using GPS technology to monitor his players' every move.  The news illicits many feelings, first of which is pride.

Because Jimbo Fisher has made Florida State relevant.  And not just relevant, but, as of now, the best program in college football.  You get to call yourselves the best when you win a crystal trophy.

The next emotion is grief.  Grief only because one of our secrets is out.  Don't get me wrong, I know it's hard to hold onto trade secrets like this, but every other program with a little bit of cash is going to jump on this technology.  And at that moment, we lose some of our originality.

I'm okay with that under the circumstances: given that we are one of the first to use this technology, we're going to be better at using it.  But others will catch up.  All you have to do is get the equipment and find the best data scientist you can.  And soon, when your receiver is looking sluggish in practice, all you have to do is let the data tell you that he's been putting in too much work.

But that thought yields yet another question.  At what point does this technology replace coaching?  Never.  The bread and butter of coaching is knowing which players to use, when to use them, and how to use them.  There is no possible way you can manipulate data to tell you the right answer; the data may show you the likelihood of a certain outcome, but if Jimbo Fisher were concerned about likely outcomes, he would have never attempted a fake punt.  It's his instincts that make him the coach that he is; it's his genuine honesty and trustworthiness that make him successful in a recruit's living room; and it's the tenacity to succeed and urgency to avoid complacency that makes him willing to try cutting edge technology.

As much as I love and adore Bobby Bowden, do you think he would have ever applied the use of GPS technology?  I doubt it.  For so many years, he didn't need it.  He had two of the three traits listed above; he had great instincts and could recruit.  What he didn't have is the ability to avoid complacency.  Hiring your son to be offensive coordinator is succumbing to complacency.

Jimbo Fisher has the guts, instincts, and abilities to be one of the most successful coaches in college football history.  His use of GPS technology is yet one more anecdote of the many ways that make him so great.