88 days until Seminole football... and thoughts on Randy Moss. 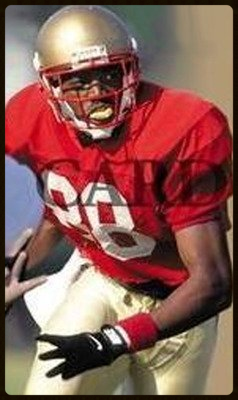 Randy Moss is arguably the best receiver Florida State will ever have on its roster.  However, as we all know, he never played a snap at Florida State because he broke his probation by failing a drug test.

But we can't help but wonder: what if?

You're going to say, "but that was at Marshall and against inferior talent."

So yes, while he lit up the scoreboard against inferior talent in college, he showed right away in the NFL that his talent was transcendental.

Does Florida State still lose to Florida in the 1997 Sugar Bowl even with Randy Moss?  Maybe.  But I'm sure they would have put up more than 20 points in the process.  Unfortunately, we'll never know what a Florida State team with Warrick Dunn, Peter Warrick, E.G. Green, and Randy Moss could have done.

It's quite possibly one of the greatest disappointments of the Bowden era and only because the possibilities were so great.  At one point, Bowden remarked that:

"He was as good as Deion Sanders. Deion's my measuring stick for athletic ability, and this kid was just a bigger Deion."

Again, I can't help but wonder "what if" and whether we would have won another championship in 1997.