« Jacobbi McDaniel is on the warpath | Main | What in the world happened to Ira Denson? »

Take the lead from Jameis. 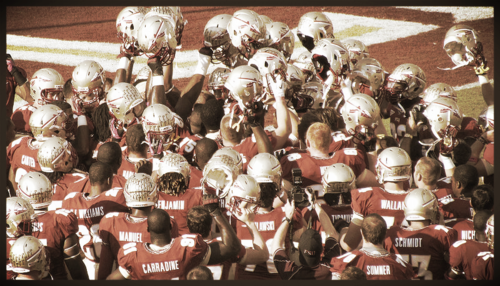 Last week was not kind to Jameis Winston or his supporters (but it doesn't matter, as we'll explain in a few moments).

Winston's name was dragged through the mud on more than one occasion last week.  And most of it, if you've read it, was more emotional than factual; more opinionated than objective.  If your job is to make money off the number of people viewing your article, well, then you did your job.  But don't smear someone's name just because.  Before we run off and provide our own opinions (hey, I don't get paid for this), let's review what happened.

Last week began an eventful one.  FSU fans discussed the hearing regarding whether, and to what extent, Chris Casher or Ronald Darby violated the Student Code of Conduct on the night of an alleged rape.  We also got a chance to read Chris Casher's official statement.  It was a very heartfelt statement, though very clearly re-written by his lawyer.  And don't get me wrong, it is supposed to be that way, but you nor I use surreptitious on a regular basis.  I think the last time I even used the word was on the SATs. 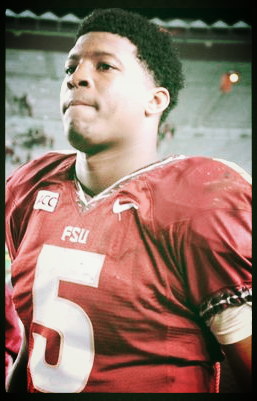 Then we saw two articles, one by Mike Bianchi and another by Christine Brennan.   Both of them served only to smear Jameis Winston's name and it's unfair.  The national perception, thanks in part to the momentum created by those two articles, is that FSU is letting Jameis Winston off too easy and, in the process, sacrificing the integrity of its academic and athletic standards.  Those articles point to the fact that Jameis Winston was not at the hearing for his teammates.  Those articles ignore the fact that Winston's own attorney admitted that Winston was never called to be a witness.

Arguably, maybe the univeristy is trying to protect Winston.  Not from harm, but from unfair criticism becaue Winston lives, at this point, in a damned-if-you-do, damned-if-you-don't world.  It'll never matter what he does.

According to the perception offered by writers like Bianchi and Brennan, he seems like a kid who "has it easy" and is above recourse, no matter the circumstances.  According to Winston's supporters, he's a victim of being in the wrong place at the wrong time.

Even Bryan Burwell of the St. Louis Dispath piled on, this time accusing us of overlooking Jameis Winston and the off-field incidents because of our football-obsessed culture.  Burwell claims that Winston's entire life is out-of-order and, instead of getting help, Florida State is doing anything and everything possible to keep him on the field.  While he raises yet another compelling argument, it is, in the end, nothing but one of emotion and not fact.  The thing is, no one is above football and it is for the same reason that no one is above the law.  Until Jameis Winston has been found guilty of anything, we can't support him unfairly being cast him as someone who is guilty.  His critics act as though he's a convicted felon, running amok in our society.  No, he's just a kid who may have made some mistakes here and there.  And yes, a kid who happens to be very good at football, but again, just a kid.

In reality, Jameis Winston is a young man trying to live his dreams.  He's not a villian.

He is not the villian that he is made out to be, but, thanks to a few unfortunate circumstances, he will be villied by his rivals.

It's actually a good thing for this team; no one is behind them in unison except for us.  The attacks on Jameis have served to make this team stronger.  It's actually brought them closer and that, for every single team we play next year, is a terrifying reality.  The team is adopting an us-against-the-world mentality and this is just the edge that this team needed to overcome the championship coma.  There will be no championship coma; the team is hungry to prove the world wrong, again.

to all the people who dislike my quarterback. STFreakU and go find someone else to mess with. Tired of seeing people down fsu.

So, I finish with this question: Can we change the dialogue, once and for all?  Maybe can we just take the lead from Jameis and not say anything at all and respect due process?

For as immature as so many make him out to be, he has shown considerable maturity and restraint by not responding to his critics.  In this age of social media, all it takes is five seconds and the push of a thumb-print to ruin our good name.  Winston has avoided responding in any way to the criticism bestowed upon him.  He has instead focused on improving his craft and moving forward.  And that's the lesson for all of us.