« We still love Jameis and here's why... | Main | Kelvin Benjamin is a Carolina Panther »

Lamarcus Joyner is what Greg Reid could have been... and I hate saying it. 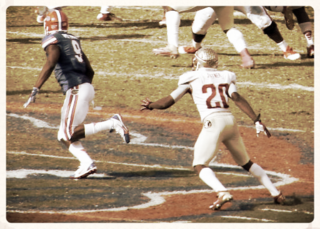 This article is actually painful to write.  It pains me to think that Greg Reid should be sitting in Lamarcus Joyner's position... a relatively undersized cornerback, looking forward to being drafted and looking back on a prolific collegiate career.

Moreso than Joyner, we are aware of Greg Reid's toubled past.  The central themes are awfully similar, however.  A largely absent father with a troubled past of his own.  A mother doing everything possible to feed a household.  A neighborhood of temptations taking him down the wrong direction.  For both Joyner and Reid, their past is fuel to keep fighting.  And it's hard to truly blame Reid for having setbacks; a lot of is just due to the house he was raised in and fighting the demons that come with growing up in that environment.  Football is a way of escaping those demons, but whether someone can wholly escape those demons is going to define whether they are looking a making it to the league or still fighting for a chance to come back and prove they can make it.

This week, we learned a lot more about Lamarcus Joyner.  It's a story we're glad is being told because Joyner was the thread that kept the defense together.  He was an unsung hero of sorts, always performing at a high level, but never quite garnering the attention that he deserved on a national level (though, to his credit, Kirk Herbstreit has always gushed over Joyner).

But Joyner's story sounded awfully similar to Greg Reid's story... in too many painful ways and leaving me with the question: how great could Greg Reid have been were he able to fight those demons?

What helped Joyner and Reid both survive and even get to Florida State were loving, stable mentors.  Getting on campus is hard enough, but they did it.  Staying on campus is the most difficult phase, however, and only Joyner was able to do so.

Joyner's story is a story of triumph, as he will be drafted by an NFL team tomorrow.  His hard work will have paid off.  Unfortunately for Greg Reid, he's still battling for that shot.  He has a contract with the Rams but he's going to need to impress during workouts and the pre-season to hold on to that contract.  Even more importantly, he needs to stay out of trouble off the field and out of the headlines, no matter the reason.  He was arrested within a week of signing an NFL contract, but thankfully, made amends by showing up early to the Rams' offseason workouts.

But all of this just makes me wonder: how good could Greg Reid have been?  The balance between success and failure, especially when it comes to the high-stakes of the NFL, is fairly delicate.  Joyner struck it, Reid didn't.  What was the difference?  They both came from difficult backgrounds, they both came to Florida State.  Greg Reid will be rememered for his heroic performance against South Carolina, but also for failing to live up to the expectations that he created for himself. He'll always be one of my favorite Noles but he'll always leave me wondering "what if?"