« Where my Noles at? The undrafted free agent edition. | Main | An early preview of the Oklahoma State-Florida State game, Part 1 »

Jameis Winston needs a mentor, not a baby sitter 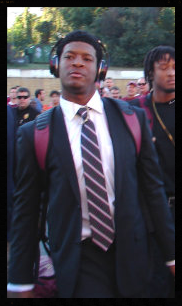 From one day to the next, Jameis Winston turned into a star.  An instant celebrity.  A beloved fan favorite.

And as quickly as his star grew, it began to tarnish.  At first, the incidents seemed innocent.  But then he became implicated in incidents that were far from innocent.  Maybe his legend grew too quickly, incapable of being managed.

Yes, Jameis Winston has done some dumb things.  And yes, I'm the first to get upset about it because I expect better of our quarterback, but I think it's time for the madness to stop.

Winston's father, Antonor Winston, claims that Florida State should have somebody around Winston at all times, twenty-four hours a day, seven days a week, and that he should never be by himself.

How realistic is that?  And more than anything, how insulting is that?

Jameis Winston doesn't need a baby sitter, he needs a role model, a mentor.  I think it should be none other than Cam Newton.

The similarities between Cam Newton's story and Winston's are eerie.  Cam Newton became one of the most divisive players in all of college football.  You either loved him or you found reasons to hate him... and the reasons to hate him were many.  He was dismissed from the University of Florida for stealing a laptop.  He was also involved in an academic misconduct investigation, with allegations that he turned in someone else's paper with Newton's name on it.  He was allegedly paid by Auburn.  The list, really, goes on and on.

And now, Winston has, unfortunately, a somewhat similar list.

As an initial matter, we can't live in denial.  Winston has some growing up to do.  But Cam Newton showed that you can overcome those youthful transgressions.  And that's why Cam Newton should try and help Winston.  Winston doesn't need a baby sitter.  That's insulting.  That means you have no trust that Winston can make the right decisions on his own.  Winston's father is basically saying that his son can't be trusted alone and needs someone to make decisions for him.  How insulting is that?

If he can be quiet and re-build his off-field image, he will be selected first overall in next year's draft.  But that's a big question... Winston has struggled to stay out of the spotlight.  A Google search of Jameis Winston yields more articles about his transgressions than his on-field accolades.

It doesn't have to be that way and the only person who knows what that's like is Cam Newton.