Freeman and Stork taken in the fourth round 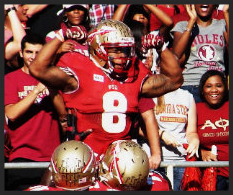 It's only fitting that Freeman and Stork went together in the 4th round.  Stork hiked the ball, Freeman took it to the house.  Both were selected to teams that should make for a good fit.  Freeman is going to the Atlanta Falcons where he'll share the workload with Steven Jackson.  I get that Jacquizz Rodgers is still on the Falcons, but Freeman is much more suited to be an early down back than Rodgers, which would seem to mean that Freeman would become the incumbent starter if Jackson were to get hurt.  And let's be honest, it's Steven Jackson and he's likely to get hurt (see, e.g., missing most of last season with a hamstring issue).  But until then, Freeman gets to learn from one of the best running backs to play in the last decade.  Regardless of whether he scorned your fantasy team, Jackson was a top tier running back for many years.  And much like Toby Keith, he can be as good once as he ever was, which will take pressure off Freeman to start right on day 1. 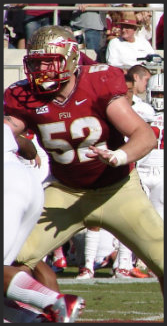 Meanwhile, Bryan Stork was taken two picks later by the New England Patriots.  This pick surprised me, but more than anything else, it is a testament to Stork's talent, maturity, and professionalism.

This is also a notch in Rick Trickett's belt.  He deserves a lot of the credit for coaching Stork, though Stork gets the full reward of an NFL contract.

Stork arrived at FSU as a 6'4" 240 pound "tight end" but all indications pointed to him becoming an offensive lineman.  His other offers were to Syracuse, UCF, and Florida International.  But thanks to Rick Trickett, he's a 4th round pick, going to one of the more prestigious organizations in the NFL.  And in particular, an organization that prides itself not just for brawn, but for brains.  It's finally the recognition that Stork deserves.  Show me a player that can move from center to left tackle at the drop of a hat and I'll show you someone ready to play in the NFL.