« An early preview of the Oklahoma State-Florida State game, Part 2 | Main | A 3-star recruit commits to Florida State and fans rush to the cliff. »

Yesterday was a wild day and a particularly embarassing one for Dameyune Craig. 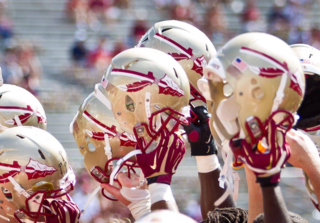 Twitter is a beautiful thing.  It's fast, easy, and very accessible.  It allows no-name Joe's to interact with people we'd never otherwise be able to interact with.  Not everybody knows how to use it, however, and sometimes... it has the makings of a powderkeg that can explode at any moment and yesterday, it did.

@AMFKNole That was so funny!!! I even laughed. Thank me when you see me for Jaboo:-)!

@AMFKNole Thank you, that means so much coming from you. I'm sure wal mart thinks the same about you

What started all of this nonsense?  A claim by Auburn that it won the National Championship in 1993, given that it went undefeated that year.  If you will recall, however, Auburn was prohibited from playing in any post-season games, meaning that no matter how good they were, they didn't play in the National Championship game and thus, they can't stake a claim to it, either.

It is that irreverence that is most surprising.  Dameyune Craig should be grateful to FSU for giving him his first big break.  Dameyune easily could have middled around at mid-tier programs, but Jimbo Fisher took a chance on Dameyune and for three years, it was a beautiful arrangement.  Craig, to his credit, is one of the best recruiters in the nation.  Without him, FSU doesn't get Jameis Winston.  He wasn't the only reason we landed Winston, but he was a big part of it.  I just don't see us taking a kid out of Alabama unless he was being recruited by another "kid" from Alabama.

Dameyune's departure from FSU was sudden and unexpected.  It left many fans wondering what would happen to FSU and its recruiting.  Not everyone saw Randy Sanders as an upgrade, but now, a year later, you should.  While Dameyune Craig was an expert recruiter and skilled in providing sideline therapy to quarterbacks berated by Jimbo Fisher, Randy Sanders is a more effective coach and sideline leader.

What's more is that Dameyune Craig proved yesterday why FSU failed to get over the hump in 2012.  FSU had everything lined up for them, but not an elite staff.  We heard stories of the micromanaging.  We heard stories about how hard Jimbo was on his coaches, that he was effectively pushing them away.

Yesterday, Coach Craig showed his professionalism and by all accounts, a complete lack of it.  Coach Craig showed that he doesn't know how to handle himself like a coach.  And for someone aspiring to be a head coach one day, he should know better than to engage random fans on Twitter for a debate about whether Auburn has any legitimate claim to a championship.  Coach Craig gives us insight into the meeting rooms at FSU; that maybe Jimbo's actions were warranted.  Maybe his coaches weren't worthy of being trusted.

It's clear now that with an older, more mature staff, Jimbo is better able to delegate.  The team last year took a leap from good to great in part because of a Heisman-caliber QB.  But they did so thanks to a new group of coaches--a group that would never attempt to insult fans on Twitter.  Yesterday validated Jimbo Fisher in a number of ways.  It showed he was warranted in trying to micromanage his staff because maybe they weren't anything but a bunch of recruiters.  Coach Craig showed an ugly side of himself yesterday and to that, I say: good riddance.