« You may not like the logo, but the players love the uniforms! | Main | Take a knee, Jameis, this is an intervention »

The enigma of Jameis Winston 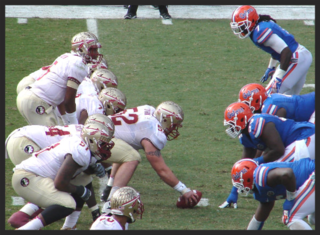 A few days ago we posted an article about life without Jameis Winston.  It wasn't that the article wasn't well received, but that the majority of the FSU fan base seems to blindly support their star quarterback.  It's, of course, very easy to support a quarterback that resurrected their beloved football program from the ashes.

But what's happening with Jameis Winston is not acceptable.

Last night he was allegedly cited by the Tallahassee Police Department or the Leon County Sheriff's Office for stealing crab legs. At this point, who issued the citation does not matter.

Just go ahead and let that sentence sink in for a few minutes; the one about Winston being implicated for shoplifting.  We're talking about crab legs.  He could have asked nearly anyone in that Publix to purchase the food for him, but he chose, instead, to shoplift them.

While there are many conflicting reports, it appears that Winston was neither arrested nor cited for shoplifting. The issues remain, however, given Jameis Winston's proximity to too many troubling incidents. Maybe he took the crab legs as a mistake but we will never know. What we are left with are a string of run-ins and disputed incidents. Most likely, Winston suffers from a lack of maturity. But the issues with Winston are ongoing and long-running.  Fans will be conflicted with Winston as long as he continues to (1) get into trouble and (2) be successful on the football field.  I will continue to have my own reservations, not only about Winston, but about supporting a team led by Winston and that's an unfortunate reality given our recent success. I love my team but this isn't a smear campaign. This is a pattern of issues.

Fresh in every Florida State fan’s memory is the sight of Jimbo Fisher hoisting his first of hopefully several national championship trophies.  Almost on the verge of tears and most certainly experiencing unbounded joy, Jimbo Fisher lifted the trophy for everyone to see.  In that short moment, we all saw the fruits of his labor, enduring the “coach-in-waiting” phase and persevering through a top-to-bottom overhaul of the program.  This championship will always have his fingerprints all over it.

But how will this championship be remembered?  I’m going to argue that it will almost certainly be tarnished, whether we like or not, because of Jameis Winston and the investigation surrounding his actions on a December night in 2012.  They are further tarnished by his continued brush-ups with the law because each continued issue diminishes any credibility he once possessed.

Let’s be clear about one thing: whether we want to acknowledge it or not, articles like the one recently printed in the New York Times represent the national perception of what happened.  Those of us that received an education in Tallahassee profess our loyalty for our school—sometimes blindly—but to the rest of the world, Florida State is seen as a football school willing to step over anything in its path to gridiron glory.

I’ll be the first to admit this: I lost interest in the games as soon as word broke, even if it was broken by TMZ, that Jameis Winston was being investigated for a heinous crime.  I found it hard to support Winston, regardless of his innocence, because of his proximity to this entire incident.  Truth be told, none of us besides those there that night will ever know what actually happened.  It isn’t fair, therefore, to judge one way or the other because we don’t have many facts.  Even if we did, we’d just tie the facts together to tell the story that we want to be told.  But what remains within the margin—between what we know and don’t know—is a cloud of doubt.  And that doubt will be cast over this past season for all of eternity.  Anyone searching to learn more about the winner of the 2013 National Collegiate Athletic Association (NCAA) National Championship will find more articles about Winston and criticisms of the investigation surrounding his actions than about the other players on that team.  We’ll also find piles of complaints that the university did not do enough to protect and maintain its integrity.

Like an infant with reflux, the New York Times just wouldn't let the world put this story down.  There's a valid reason for that. They actually managed to up the ante in many respects and dusted off a story most thought was final as of the infamous press conference held by State Attorney Willie Meggs.  So how did they up the ante?  The New York Times not only aimed at poking holes at the investigation, but also at Winston, and casting further doubt:

A month before the rape accusation became public, the university’s victim advocate learned that a second woman had sought counseling after a sexual encounter with Mr. Winston, according to the prosecutor’s office. The woman did not call it rape — she did not say “no.” But the encounter, not previously reported, “was of such a nature that she felt violated or felt that she needed to seek some type of counseling for her emotions about the experience,” according to Georgia Cappleman, the chief assistant state attorney, who said she had spoken with the advocate but not with the woman.

This is yet another data point we could use to design a story to our liking but doing so is irresponsible.  So you must make a judgment call.

Some take solace in that he’s a fairly jocular young man; you ask “how could someone so nice do something so wrong?”  Others take solace in the fact that Jimbo Fisher never thought about benching him.  For a second.  And it’s with his decision, Jimbo’s decision, that the FSU-faithful’s ___ rests.  Because, even though he’s fully committed to winning, Jimbo consistently preaches the value of character and integrity.  Jimbo also pays an inordinate amount of time to little details.  Now, did Jimbo conduct the investigation himself?  Unlikely.  But I am sure he was reticent to rest an entire season—a season that many knew from the start would be special—on not only someone with questionable character.

The problem is that stealing, from anyone, for any amount, for any reason, is wrong.  It reflects poorly on his character.  It creates doubt.  It causes conflict.

Winston made a very bad decision.  Can he own up to it is the question.  Until he does, I'm going to continue holding my reservations about our star quarterback.