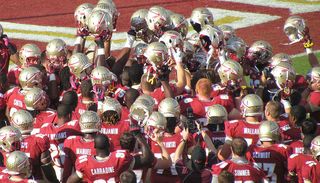 Let's assume for a second that FSU made an extra ring.  Unlikely, sure, considering how expensive they are, but possible.

Is there any former player, from long ago or even very recently, that deserves this ring?  I'll throw out a few names, although I am partial to giving the ring to players from the "darker" era of FSU football because they fought hard to bring it back.  Christian Ponder, EJ Manuel, Rodney Hudson, Xavier Rhodes, Chris Thompson, Vince Williams.  I think it's a difficult choice to make.  You could also argue that former coaches could get it as well; maybe Mickey Andrews deserves another ring for sticking around longer than he wanted to stick around.

If anything, I think I'd give it to Chris Thompson.  Battling through injury, he is the epitome of "the process" and what it takes to succeed.  He battled, persevered, paid attention to the little details, took care of himself on and off the field.  He will forever be considered one of my favorite Seminoles.  And quite frankly, as much as I enjoyed our recent thrashings of Clemson and Florida, I don't think I've enjoyed a moment more then when Thompson returned to the field against Wake Forest ... and absolutely dominated them.