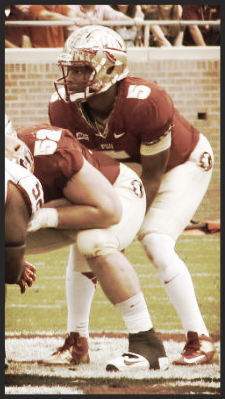 The Heisman winning quarterback for Florida State has done something very few athletes for FSU have done once again - had his fourth run-in with the Law in two years.  Yes, albeit once again over a “small” issue - stealing $32 worth of seafood.  What we are seeing is a picture being drawn - more of a silhouette of who Jameis might be.

What we know of the dynamic quarterback and reliever is this:  his personality is off the charts; his athleticism is once in a generation; his judgment is pretty poor.  Whether it is stealing soda, shooting BB’s on campus, stealing seafood, or being questioned for rape, we know this - this behavior is NOT normal or acceptable.

Let’s put the rape allegation to the side quickly.  Do I believe he raped her?  No.  Could I be wrong?  Yes.  Regardless of the allegation, he put himself in a situation where this could be accused of him.  Winston’s own comments from today are, “…my conduct needs to be above reproach.”  At the least, his conduct was not above reproach here.

Rape aside, let’s deal with the theft issues:  stealing soda using ketchup packets and stealing $32 worth of seafood.  This seems harmless, especially when viewing them as isolated instances.  That is exactly what we should not do though.  What we are seeing is a pattern, an ugly pattern.  One that stinks of self-entitlement.

I do not know Winston.  I will probably never know Winston.  My opinion on him is absolutely fallible.  That being said, I have common sense.  I have never walked into any restaurant or any place for that matter with the intention of stealing something.  Nothing says you’re self entitled more than theft.  It is screaming to the world, “This is not mine, but it should be, and I should not have to do anything for it.”  Just a little over a month ago, my truck was broken into.  Unfortunately, my wallet was in the glove compartment and it was taken.

In the wallet, I had cash, debit cards, credit cards, business cards, and of course my license.  Thankfully, the thieves only got away with my cash and $26 off my debit card from stopping at a gas station before I cancelled the cards.  What did they do to deserve this?  Was it their $26?  Did they earn it?  No.

Was I outraged? No.  I did feel violated though.  Someone came on my property, broke into my property, and stole what belonged to me.  This is what Jameis Winston did.  He walked on someone else’s property - twice. Stole someone else’s property - twice.  I don’t care if it is soda or crab legs - that is  not his unless he pays.  Stealing is the hallmark of self-entitlement.

Winston once asked reporters to beat him over the head with their microphones if he got “Manziel” disease.  Sadly, Winston got the superbug.  Manziel made mistakes which got the NCAA involved.  Winston is making mistakes that is getting the law involved.

What needs to happen is this:  Winston needs help.  The guy must get people around him who are of high character - People who have experienced great success at an early age and pushed through the media circus and lived a good life.  I do not want to see this kid two years into an NFL contract and face a major lawsuit.  Sadly, he’s involved with one now.  Assuming the civil lawsuit, which is bound to happen, fails, small situations like the ones Winston is involved with now are only negative and have been known to escalate.  Why put yourself in something like this?

And to the FSU fans who continually make excuses for him - stop!  You are not supporting him, you are not sticking up for him, you are enabling him.  Since when did standing up for truth and what is right mean you are against another person?  I am not anti Winston.  As a matter of fact, I own one jersey (jersey shirt actually) - and that is a #5 FSU shirt purchased at the GarnetGold store in the Tally mall last November.  I enjoy watching Winston play - I enjoy watching him help my ‘Noles win.

I am so much a fan of his that I want him to better himself as a person.  Sadly, most FSU fans are only wanting him on the field.  Who cares what he does off as long has he wins us games right?  Pathetic.

It really boils down to this:  the entire thing is just silly.  Me writing on this is silly.  Jameis Winston is months away from being a multi-millionaire - and he continues to steal from companies which he could own if he’d just make better choices.

We must expect more from people - not athletes; not celebrities - people.  No one is entitled to anything.  Work for something.  Earn something. Be upright and have morals - a standard to live by.

I hope Winston has dealt with the law for the last time.  Time will tell.