« A peek at the new locker room | Main | You may not like the logo, but the players love the uniforms! »

ESPN's ACC writers are usually masters of the obvious

It's probably the worst kept secret; FSU fans really aren't big fans of ESPN's ACC writers.  You could probably argue that the writers aren't particularly fond of FSU fans, either.

Recently, our favorite writers posted a piece about FSU's defense and how it won't have any seniors starting on defense this upcoming year. 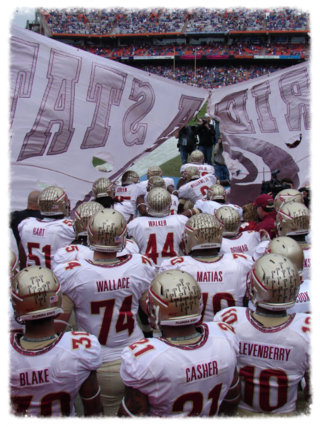 I think, for the most part, they are correct. FSU has been recruiting feverishly since Jimbo Fisher got here, but having talent doesn't guarantee that a defense will have the right blend of chemistry and leadership. That's why the leadership vacuum created by the seniors' departure will be difficult to fill on a short-term basis.  Last year's defense featured a few prominent seniors, most notably, Telvin Smith, Christian Jones, and Lamarcus Joyner.  We can all agree that, without those three players, we probably don't win a national championship.  Yes, Jameis Winston gets a lot of attention because that's what quarterbacks do, but last year's defense was special.  Without that defense, we don't hold Auburn down long enough for Winston to deliver the final strike to Benjamin.  But the three above mentioned seniors anchored the defense for a number of years and came to Florida State when it wasn't necessarily trendy to do so.  Those players represent the blood, sweat, and tears of the top-to-bottom rebuild that occured at FSU.  They deserve a lot of credit, but will be overshadowed by their goofy and jocular quarterback.  By and large, I think they are okay with that.

The question marks surrounding the defense next year are two-fold; will the departure of Jeremy Pruitt matter and will new leaders emerge?  We all know about the #noflyzone and the immense amount of talent on this team.  Jimbo Fisher and his staff have recruited just as hard as anyone else in the country and it shows.  But developing leaders is another thing.  Telvin Smith and Lamarcus Joyner held their teammates accountable.  Who has the respect of their teammates to fill that void?  I think only time to can determine that.  Plenty of players have stepped and become more vocal, but will they display the maturity in the darkest of hours to pull this team together when they need it the most?