« Seminole Soundbites: Michael Snaer able to be patient with his younger teammates | Main | Flashback Friday: One of the great goal line stands by Florida State's defense » 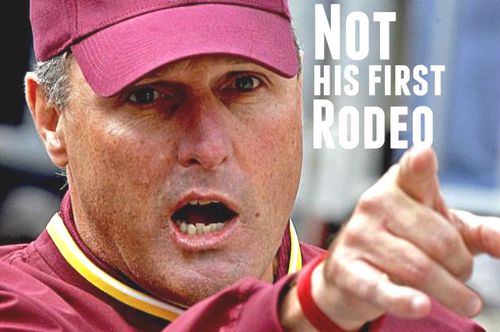 To find out more about Florida State's newest assistant, we asked Brad Lock of the Nortwest Mississippi Daily Journal about his impressions while getting to know Brewster last season. Here's what Lock told us.

• Brewster was out of coaching for a year after getting the axe in October 2010 from the University of Minnesota. So during 2011 he was a sideline reporter for Fox Sports.

• Mississippi State’s Dan Mullen gave Brewster a chance to return to coaching in August of last year. He was hired to coach WRs just two weeks before the season opener, replacing Angelo Mirando, who suddenly resigned because of alleged recruiting violations being investigated by the NCAA. Brewster was hailed as an instant upgrade.

• He was promoted to Assistant Head Coach at Miss. State just a few weeks ago (Feb. 13) and re-assigned to coach tight ends, his specialty.

• Lock says that lots of State fans thought "Brewster would leave after a year" because of his experience and contacts.

• Brewster loves recruiting*, says Lock, and "pulled in some good guys from areas outside Miss. State’s usual recruiting areas." Lock’s understanding is that Brewster will be FSU’s recruiting coordinator, and he’s already being called that on his Wikipedia page.

• After being around Brewster for the season, Lock calls him a “real personable, knowledgable guy who has a head coach aura about him,” as well as “a strong personality.”

• Lock reports that MSU “players liked him and took to him quickly.” Also that Brewster did “a good job developing receivers and helped the Bulldogs have a good year passing the ball.”

*As an example of Brewster’s recruiting skills, he’s credited with landing QB Vince Young while coaching at Texas.