« Just call him Final Second Snaer | Main | Seminole Soundbites: Michael Snaer "knew it was going in once it left my hand" » 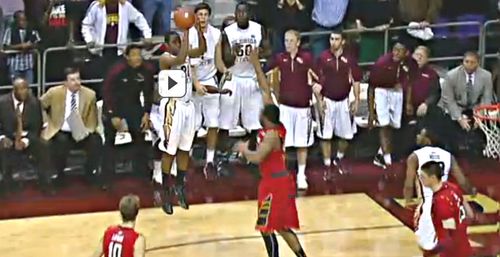 Really, was there any doubt who would get the ball for that final shot by the Seminoles?

For the fourth time in two years and the second time in three games, Michael Snaer canned the game winning three point shot giving Florida State the 73-71 victory over the Maryland Terrapins.

Ian Miller dribbled into the lane, nearly slipping and falling, but managed to keep his balance. The Terps defense collapsed with Dex Wells inexplicably leaving Snaer to help on Miller. The mistake proved costly as Miller spotted the wide open Snaer on the left wing, who promptly added to his game winners highlight reel.

Tied at thirty four at the half, the Seminoles trailed for much of the game taking narrow leads just a handful of times totaling less than four minutes of clock time.

FSU led just twice in the second half with the last lead before the dramatic ending occurring with 14:02 to play on Montay Brandon's layup in transition. That lead was erased thirty seconds later when Nick Faust hit a three from the left wing and was hit on the arm on the play by Snaer for the four point play.

That looked like a momentum builder for Maryland, who stretched out to a 54-48 lead and eventually a 62-54 lead on back to back baskets by Terp's big man Alex Len. The latter came on a alley oop for the slam dunk with 6:50 to play. They were Len's only points in the game as foul trouble and defense limited his contributions.

Maryland would go back to that play later in the game that proved to be a crucial moment for FSU.

Florida State dug in defensively and the offense executed when it had to with the Seminoles outscoring the Terps 19-9 to close out the game. Four different 'Noles contributed in the run, Snaer, Miller, Okaro White, and Kiel Turpin.

The Seminoles' chances did not look good when Brandon fumbled away the ball dribbling down the lane and Snaer fouled Faust on the scrum for the ball.

But luck, if you want to call it that, took over when Faust missed the front end of a one and one.

FSU got the rebound, which in itself was luck given the 36-20 rebound disparity Maryland held over Florida State.

After moving the ball over the time line Hamilton called timeout.

The Seminoles moved the ball effectively with Snaer getting the ball on the left wing. Slashing into the lane the floater found the bottom of the net with 45 seconds remaining.

Maryland called a timeout to set the play. And it was a good one that worked previously in the game. The Terps tried to back door the lob pass to Len running in behind FSU's defense. And it almost worked. Except that Turpin got just enough of the ball to throw Len's timing off and the ball clanked away from the rim.

In another stroke of luck, White was tied up on the rebound. But the possession arrow favored the 'Noles.

There was just 11 seconds left, and then 8 when Hamilton called timeout with his team down 71-70.

The Seminoles could not have executed the play called in the huddle any better.

Brandon with the ball out above the key found Miller curling up off the base line off a back screen by Turpin under the basket. Cutting between two defenders, Miller nearly fell. Fortunately, somehow he didn't. Curling down the left side of the lane, Miller drew two post players and, thankfully, Wells to him.

If Mark Turgeon said anything to his players during the timeout it had to be be to NOT let Snaer alone. But they did, and Miller, who doesn't get to practice with the team due to the bone bruise, smartly didn't force the shot and made the extra pass giving Snaer the dramatic conclusion.

Maryland had a chance, albeit with a slim one, with just 1.1 seconds on the clock. Wells could not atone for his mistake as his long three from half court missed its mark.

"I got a clean look tonight so I knew it was going in once it left my hand," Snaer said. "Ian put them in a bind because he got so deep and there was so little time left...Ian has hit game winners himself so either one of us it doesn't matter, we can both hit them."

"You knew he was going to make it," Maryland head coach Mark Turgeon said. "He's made a lot of big ones."

Looking into the details of the game there were several statistics that were large factors in the win for FSU.

First and foremost was the just season low (by far) six turnovers Florida State had in the game, giving away only five points to the Terps. Conversely Maryland committed 16 miscues that FSU turned into 19 points.

Secondly the free throw margin was in favor of FSU. The Seminoles converted 24 of 31 attempts to just 13 of 18 for Maryland. Key in the success at the line was White. While not shooting well from the floor (2-8), the junior forward was a perfect 10 of 10 from the stripe.

"I think what made the difference tonight is a couple of things: obviously we didn't turn the ball over and give them a lot of extra possessions," Hamilton said. "I thought we scripted things a little better for our players tonight and we were able to execute a little better and we attacked the basket a lot better off the dribble drive and had an opportunity to get to the foul line a little more to help neutralize the fact that we did a poor job defending them and they basically controlled the boards."

Hamilton obviously was not especially pleased with the defense, allowing Maryland to shoot 49% from the floor. However the 'Noles were more efficient shooting the ball, connecting on 46% of their shots. That was even with a very mediocre 29% from the arc.

But thankfully for FSU fans the one three pointer that really counted went in the basket and it could not have been at a better moment.

Florida State improves to 12-8, 4-3 taking some momentum into a Saturday afternoon contest at 4 PM against Duke at the Civic Center. Duke is fresh off a hard fought 75-70 win over Wake Forest Wednesday night.