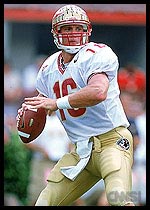 If Jimbo wants to instantly rally FSU's faithful from depression over Coley's exit, hire Chris Weinke. It's a bold, smart move that will send Fisher's approval rating through the roof and give the Noles offense some fresh thinking.

Is there anybody that doesn't think Weinke would be a quantum leap over Coley in coaching FSU quarterbacks (Coley's latest assignment in the staff reshuffle)? Weinke, of course, has an impressive list of signal callers he's tutored at IMG Academies.

As for O.C., would Jimbo give Weinke the job over a more experienced Napier or Sanders? He's done exactly that on the defensive side, with Pruitt as a first time D.C.

And Weinke could e-e-e-ease into play calling duties, acting as Jimbo's understudy during 2013 with the promise of graduating to the role in a year -- two at the most.

Recruiting? What 17-year old phenom wouldn't listen to what a genuine Heisman trophy winner has to say.

It's a no brainer, Jimbo. Make the call.