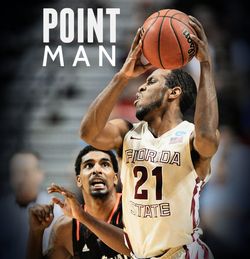 Apparently sitting out the Louisiana-Monroe game for disciplinary reasons had an impact on Michael Snaer. And in a big way as the senior guard set a new career high with 30 points in leading Florida State to a hard fought 79-76 win over the Charlotte 49ers.

In recent weeks Snaer had talked about how he felt he needed to be more aggressive and putting the team on his shoulders and look to score earlier and more frequently in games. He did just that pouring in 17 points in the first half keeping the 'Noles close in trailing the 49ers 40-35 at the break.

A 17-5 run by the Seminoles to start the second period gave FSU a 52-45 lead at the 14:07 mark. The spurt was punctuated by Montay Brandon's uncontested drive down the lane for the layup followed by a three from the left corner.

Even after Charlotte tied the game at 52 all, Florida State built a seven point lead several times. Snaer's wide open three from the left corner gave FSU a 71-64 margin with 3:42 remaining.

The 'Noles looked like they had managed to gain the upper hand in the game. Charlotte thought otherwise.

Terrance Shannon and Okaro White missed free throws and a turnover along with an offensive foul on Shannon took away potential scoring opportunities from FSU.

Meanwhile DeMario Mayfield had the conventional three point play after White committed his fifth foul, closing the score to 73-71 with fifty-five seconds on the clock.

Devon Bookert converted three of four free throws to build the lead back to 76-71 and twenty ticks left.

A jump-stop basket by Mayfield eight seconds later made it a one possession game. Forced to press foul Snaer resulted in two points.

With 4.3 seconds left and Charlotte obviously working for the three ball shot, the Seminoles did well in covering the perimeter out near and around the circle. The defense however did not cover the corners well and a three pointer from Victor Nickerson made it 78-76.

It was Aaron Thomas's turn to put the game away after being fouled. The freshman got a taste of what a little pressure is like as he missed the first of a two shot foul.

It came down to the final play with Ivan Benkovic taking the final shot to send the game into overtime. Fortunately the shot, from just inside the time line, was a bit out of his range. If you were a Seminole fan, though, you held your breath as the ball clanged off the front of the rim as the buzzer sounded.

Although it was technically a neutral site game, it was essentially a home game for the 49ers. FSU passed the road test playing actually much better than they had at home, even in the last two games, both wins. In particular the interior defense was improved with more challenging of shots and more help as the ball came inside (although it didn't look like it with the 49ers scoring 38 of its points in the paint).

There were drawbacks, though, as rebounding suffered again with Charlotte collecting 18 second-chance points to just 4 for FSU.

But other than that FSU was more aggressive, getting to the line twice as often as Charlotte (26 of 34 for FSU vs 11 of 17 attempts for Charlotte). The 'Noles took better care of the ball as well with just 14 turnovers.

Joining Snaer in double figures was White with 10 and Thomas with another excellent offensive game, adding 17, breaking his career high by one point set last Monday night.

The Seminoles will take time off for Christmas and resume play Dec 29 at 2 PM to take on Tulsa and new head coach Danny Manning in Sunrise, Florida as part of the Orange Bowl Classic.