« Stat Shootout: Huskies dominate the offensive side, Noles tops in most D metrics | Main | Time out for a look into the future: Jimbo's Dream House (the indoor practice facility) is taking shape »

Noles blow away a different Hurricane team in South Florida 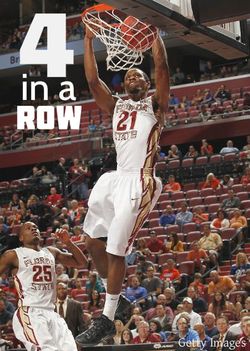 With a grin on his face, Leonard Hamilton said after the game, "We're getting closer."

Given his team's second half performance on both ends of the floor against Tulsa it is easy to see why the head coach made that comment.

Leading 36-33 at the half thanks to a buzzer beater three pointer from Devon Bookert, the Seminoles shot 57% from the floor outscoring the Golden Hurricane by 16 points, while holding Tulsa to just 37% over the the second twenty minutes, leading to a 82-63 victory.

Hamilton earlier in the week said he was being patient with his defense It appears maybe that patience is paying off. And Hamilton's defense did it mostly without his three seven footers, putting Okaro White in the five spot much of the time.

Had it not been for 11 three pointers by the Golden Hurricane, the margin likely would have been greater. Pat Swilling scored 17 of his 19 points in the first half, and when the FSU defense shut him down Scottie Harrelson scored all 17 of his points in the second half. Both doubled or better their scoring average with each sinking five threes.

It was just one of those games for the duo. Case in point, when Harrelson launched a three from the left wing and still made the shot even with two defenders in his face.

But it was the FSU defense clamping down on the rest of Tulsa's team that was the difference, in particular just 11 made made shots around the basket.

Certainly Tulsa (7-6) is no cream of the crop college basketball team. But Florida State has lost to lesser teams this season.

Despite missing their first six shots, the Seminoles took the early lead, 13-8, only to eventually see Swilling can back to back threes, giving Tulsa a 27-22 margin with 5:22 left in the half. Bookert scored four straight points, the last two coming right before the buzzer, right after FSU's defense had stuffed a point blank shot at the other end. The buzzer beater gave the 'Noles a 36-33 halftime lead.

Tulsa tied the game and subsequently took a one point lead, 41-40, just two minutes into the second period. A 24-8 FSU run gave the Seminoles a 64-49 advantage. Michael Snaer with the driving layup right past the defender plus the foul with 8:48 remaining put enormous pressure on the Tulsa offense.

That led to mistakes, i.e. a technical foul on Tulsa head coach Danny Manning puting Snaer at the line, who canned three of the four attempts. Bookert immediately took advantage of the extra possession with a three pointer, putting the 'Noles up 72-53.

Even with 6:14 left to play Tulsa did not appear to have the firepower to make a comeback similar to the one in the previous game against Oral Roberts, overcoming a 17 point deficit. Although Harrelson made it interesting with back to back threes.

The final four points by Tulsa was inside a minute to play after Hamilton inserted his walk ons. However Joey Moreau canned a three from the right corner to counter.

Snaer was named the game's MVP finishing with 19 points, 12 in the second half to go along with 6 rebounds and 4 assists.

It was Terrence Shannon, though, that had the career game with a double double. Displaying touch on his jump shots to go along with his power around the basket, Shannon’s 16 points on 6 of 11 shooting set a new career high for the junior. His 10 boards contributed to FSU out-rebounding Tulsa 44-32.

White added 12 points and Bookert was 4 of 4 to finish with 10 points.

FSU harassed Tulsa ball carriers right from the start to cause 17 miscues by the Hurricane. The highlight steal of the game was Robert Gilchrist snagging a pass from the right wing to the post out of mid air and launching a pass to a streaking Shannon for the bucket plus the foul. Gilchrist did not get credit in the official box score, but was assured after the game that the stat would be fixed to reflect his effort on the play.

Another highlight was Aaron Thomas picking up the rolling ball tipped away by a teammate and quickly getting the ball up the floor in a 3 on 1 break finished off by the highlight reel slam dunk by Snaer.

FSU improves to 8-4 and is on a four game winning streak. Apparently the Seminoles like neutral site games. This was the fourth neutral site game for FSU, all wins. The contest was part of a Orange Bowl Basketball Classic double header in Sunrise, Florida. It was the fourth appearance overall in the 19 year history of the event with the Seminoles winning their third game in the Classic (others: 2005, 2008, 2012).

The Seminoles have their first true road test of the season when they travel to Auburn for a 7 PM tip off against the Tigers on January 2nd.