« Stat Shootout: Noles have the edge in all but one important metric | Main | Seminole Soundbites: EJ, Dawkins and Hopkins reflect on the disapointment that is their last game at Doak »

No. 1 gator beat writer picks the Noles to win 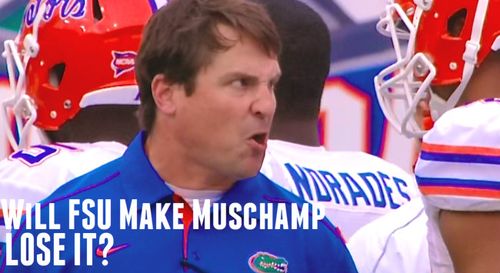 Here's our annual, exclusive interview with veteran UF beat writer, Pat Dooley. As usual, Pat pulls no punches when it comes to what he thinks of the gators.

The obvious first question: How mobile is Jeff Driskel going into the game?

Dooley: Everything I heard from Tuesday's practice is that he was running around like there was nothing wrong with him. But you never know for sure. I don't think his ankle sprain was as bad as last year against Alabama that kept him out. But anytime you've had an ankle sprain, you can tweak it. It doesn't even take a full strain to bring it back. So I think he'll be fine as long as nothing else happens to him.

Do you see Jacoby Brissett getting better with increased playing time?

Dooley:  He's okay. He's not mobile. He can't run, he can't move. He throws the ball pretty well -- probably as well as Driskel. But Driskel gives them that element of not only the run, but the threat to run. And I think that's a huge factor. If you have that element of fear of the run it helps you a lot in the rest of your running game.

Why do you think Florida's offense has slowed down from the first half of the season?

Dooley: That's what I wrote for Saturday's paper. It's a combination of many things. First is, they aren't that skilled offensively. Number two, their offensive line has been beat up a little bit. They're fairly healthy for this game, but they've been beat up, had guys missing and lost continuity -- and their backups aren't very good. And then as the season went on, I don't think they had the personnel to adjust that much offensively (as opponents figured out how the gator offense ticked).

Also, and this is a theory of mine. Florida had a very early bye week. And usually in a bye week you self scout and figure out what you're doing and try to get away from tendencies. Theirs was so early I don't think they could do any self scouting and I think that hurt them a little bit, too.

Will we see any new wrinkles from the Boise State playbook?

Dooley:  It's easy to think that. And I wrote a whole column about that -- that gator fans are saying we've been saving something for FSU. And I'm like, you don't have anything to save. I just don't think they have the athletes at wide receiver to do a whole lot different. You're going to see some things, but I don't think it's going to be that different from what you've seen before. They're going to try to win the way they've won ten of their eleven games. Which is running the ball, playing good defense, winning the special teams battle and not turning the ball over. They lost one game and they turned it over six times.

Has O.C. Brent Pease been held back from the wide open offense he ran at Boise State?

Dooley: Yeah, I think a little bit. But I think they identified what they had in the spring. And they said, this is who we are, we can't do a whole lot offensively. And I've talked to Will about it. They know they have to recruit better and get better players in here. Florida's been terrible the last three years on offense. So it can't be the coaches, including Urban Meyer, Steve Adazio and Charlie Weiss -- all now head coaches. They have to get better. But I don't think you're gonna see a totally revamped offense.

Will Muschamp take a cue from Virginia Tech and pressure EJ Manuel all day?

Dooley:  I would hope so. Because they're not a great four-man rush team. They're okay, They're not bad at it, but they're not great. So I would think they'd have a need to run some blitzes. But at the same time, you've gotta contain Manuel. He's a very mobile guy.

Does this game mean as much to the players as the UGA game?

Do you think Muschamp's selling it as a big must-win rivalry?

Dooley: He's weird that way. He's one of these guys who believes that if you make a rivalry week too important, then next week you're going to have a letdown. So he does not try to make this week any different from the Louisiana-Lafayette week. And if they play the way they did against Louisiana-Lafayette, they might lose by 50.

You say Driskel's ankle is better, but any other key injuires?

Dooley: I think they're pretty healthy. I know Shariff Floyd (DT) had an injury in Tuesday's practice, but everything we're hearing is that it was just a tweak. He tweaked his back or his hamstring, but he's fine now. So I think they're as healthy as they've been for awhile.

Win or lose, Muschamp's job is safe for next season, right?

Dooley: I don't think his status is as comfortable as it should be, at least with the fans. And that's with the fans, not the athletic director or the boosters. Fans here suffer winning like nobody else. They can go 12 - 0 and be upset. And they were in 2009. It was unbelievable. And I think it's the same with this team. Like, "Aww, I'd rather go 8 and 4 and have a good offense."

Dooley: Not only Spurrier, they're Tebow loyalists, too. They had the Spurrier years, then the Tebow years and they expect it to be that way all the time.

Dooley: The bottom line is I picked FSU to win. I think FSU is a better team. But Florida's played a lot tougher teams, so maybe that will be the difference.