Before the kickoff Hunter dialed up some input from an old friend who knows something about turning a punt into a quick six points.

KJ had 77 yards on three catches, one of which was a TD against the Dookies. He talks in the locker room about the advantage of knowing the Blue Devils would come in playing physical and lining up in man coverage. 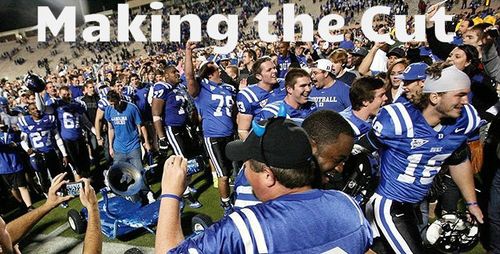 Suddenly, Duke sports means more than just basketball. Blue Devil Nation does a great job covering it, just as their publisher did answering our questions.

Last week against UNC, Duke had its best offensive number (510 yards total) during the Cutcliffe era. How would you describe the offense Coach "Cut" runs?

PATRICK: The Blue Devils primarily run a no-huddle spread offense. Duke has put up prolific passing numbers under Coach Cutcliffe, ranking in the top two in the ACC in each of the last three years, and currently are again 2nd in the conference this season. In this pass-friendly offense, redshirt-senior QB Sean Renfree and senior WR Conner Vernon are both re-writing the Duke and ACC record books, with Vernon just 93 yards from Peter Warrick’s all-time receiving record.

The difference between the 3-9 Duke offenses of the past two seasons and the 6-2 Blue Devils of 2012 is primarily balance. While Duke boasted impressive passing numbers, their rushing game ranked nearly dead last in the country in each of the past few seasons. This year, with a veteran line and a trio of talented backs in Juwan Thompson, Josh Snead, and true freshman Jela Duncan, Duke has had some success on the ground. In their two losses to Stanford and Virginia Tech, the Blue Devils totaled a combined 49 yards rushing. In each of their 6 wins, they have eclipsed the 100 yard rushing mark, including a Cutcliffe-era best 234 net yards last week against North Carolina. So while Duke is most effective and dangerous with moving the ball through the air, they have been able to keep opposing defenses honest by running the ball effectively. They will need to continue to do that on Saturday against the #2 ranked rush defense in FSU.

Who's the most dangerous player on Duke's offense and why?

PATRICK: This was a much easier question to answer in previous years, as Duke now has several weapons on offense. All three Duke running backs are capable of breaking a big run. Sean Renfree has shown he can throw the ball all over the field with good strength and accuracy. Anthony Boone is more than a serviceable backup, leading Duke to wins at Wake Forest and against Virginia. Brandon Connette has been nearly perfect in short yardage and goal-line situations, showing he can throw, run, and catch for a touchdown. Duke has two of the best wide receivers in the conference that few talk about in sophomore Jamison Crowder (#6 in ACC) and senior Desmond Scott (#13 in ACC), who moved from RB in place of the injured Blair Holliday.

The Blue Devils have a number of playmakers, but the most dangerous player on the roster is senior WR Conner Vernon. Just 93 yards from becoming the most prolific receiver in ACC history, Vernon probably does not get enough credit for his abilities. Teams don’t expect him to be fast, but I can’t tell you how many good corners I’ve seen him beat. He has incredible hands and it’s honestly a shock when he doesn’t catch a ball thrown his way, even when double teamed. He runs great routes, fights for extra yards, and makes tough catches in traffic. Opponents try to be physical with him, but that never seems to slow him down. Probably more than anything, Conner Vernon is a winner, and the type of player that any college football fan should enjoy watching. In a defining game for this Duke program against UNC, Vernon caught 6 passes for 124 yards. All 6 of his catches went for 1st downs, including two critical 3rd down conversions on the game-winning drive. Vernon is a player that opposing defensive coordinators have been trying to slow for four seasons, but he continues to pile up catches, yards, and points for the Blue Devils.

FSU's defense is no. 2 nationally against the run and no. 7 against the pass. How do you think Cutcliffe will attack the Noles?

Seminole Soundbites: Nick Waisome zeroes in on his targets this Saturday

"Two and Three. Those are the targets," Waisome says, referring to the jersey numbers of Duke's two leading receivers. Nick has nothing but praise for the Blue Devils and leads off here by praising Conner Vernon, no. 3 in the ACC in both receptions and receiving yards per game.

I don’t get too many words a week to express my points, so I try to do so in a clear, concise manner. Considering that today’s topic is to discuss the career of Chris Thompson, I refuse to waste any words about the horrible officiating, the horrible fans, or my horrible experience at FSU-UM.

Instead, let’s look at a player that one would consider a True Seminole. Chris Thompson, affectionately called CT4, was a four-star recruit out of Madison County. Rated as the number two all-purpose back, he chose to join the Seminoles over Miami and Florida.

From the start, Thompson saw plenty of action, playing in 11 games his freshman year. His responsibilities were primarily spelling the run game, and returning kicks. Despite the depth in the backfield, Thompson was able to take advantage of the opportunities he had.

In 2010, Thompson led the Seminoles with 845 rushing yards on a mere 134 carries. He did this despite sharing the backfield with two other running backs and only earning six starts. Displaying the speed he truly possessed, Thompson would have FSUs third longest touchdown run from scrimmage, with a 90 yard dash against rival Miami. Showing the dual-threat capability he had in high school, Thompson led all FSU running backs in receptions and yards. He capped it off with an MVP performance in the Gator Bowl, carrying 25 times for 147 yards.

Unfortunately, 2010 would be CT4’s best season as a Seminole. No stranger to the injury bug in high school, Thompson suffered a broken back on his first carry against Wake Forest midway through the 2011 season, and was forced to miss the rest of the season. However, Thompson knew that he would have one more shot, and continued his quest to become the first FSU RB with over 1,000 rushing yards since Warrick Dunn in 1999.

Thompson came out firing in 2012, rushing for over 100 yards in three of the team’s first six games. This included an amazing 197 yards on only nine carries in his “revenge” game against Wake Forest.

However, Thompson’s goal would once again be cut short due to an injury. A torn ACL against Miami last weekend would leave him 313 yards shy of the 1,000 yard goal. Being that it is his senior year, barring a medical hardship, it’s safe to say that Thompson’s career at FSU is over.

It’s sad, because Thompson was a hard worker with speed to burn. He brought a lot of passion to his game, and definitely was making himself well known following his recovery from the broken back. His multitude of abilities will make him attractive to NFL scouts, but his injury history will scare away a lot of potential teams. At best, he is a third day flyer. At worst, an undrafted free agent. Regardless, Thompson should get an opportunity at the next level, and find success similar to those with his stature (Darren Sproles, Leon Washington, etc.)

Because of the efforts made over the last four seasons, I give Chris Thompson the first ever Ryan’s Rant Nole For Life Tomahawk Sticker.

Thank you, and good luck in the future CT4.

Seminole Soundbites: Telvin Smith plays defense to "create chaos, that’s what I like to do"

Good insights here from the Noles heat-seeking linebacker as he explains the Noles 6-Pack alignment and learning how to stick to his assignment on a play instead of going with his instincts.

Duke LB David Helton: "We’ve got to attack the line of scrimmage and make them run around us"

Seminole Soundbites: Wilder's pays props to Chris Thompson who "taught me and Freeman everything we know"

Wilder hates the way it happened but talks here about the sudden opportunity for more playing time. And that includes sacrificing his body. As a big back, he believes part of his role is "wearing down" opposing linebackers.

Big number nine talks about beating Mimai and having a bigger role on the defense. Karlos realized that getting reps “definitely depended on me…if I wasn’t prepared I was not gonna play.”

Seminole Soundbites: Tank gets real about getting held

Here's Carradine airing his frustration about the topic that burns every Nole fan. Plus his takes on what the team learned from the UM win, facing Duke, and the progress of Mario Edwards as his backup.