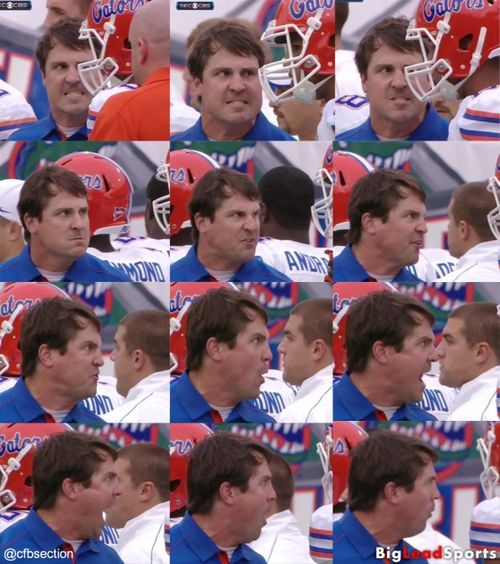 Here's Jimbo on a windy practice field after Tuesday practice. The Noles worked to correct things like busted coverage in the Duke game that could've cost them -- if the Blue Devils had taken advantage. 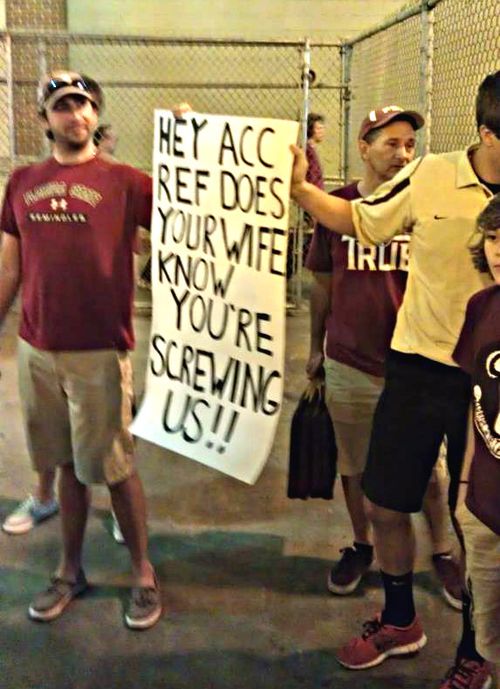 Weekly Report Card: Seminoles jump to the head of the class Florida State got things going early and played a very impressive first half. The Noles showed signs of that team we watched the first few weeks of the season. Even though it seemed that they relaxed too much in the second half, it was still a solid performance.

Offensive line: A
The offensive line had a strong showing from start to finish. They opened up running lanes for the backs, and kept the pass rush in check for much of the game. Granted, Duke was overmatched. However, it could have been just as easy for the Noles’ line to underestimate them. It was a great way for them to head into their bye week.

Running backs: A-
Florida State finished with 261 yards rushing. James Wilder Jr. and Devonta Freeman both filled in nicely for Chris Thompson. Freeman did have a fumble that hurt their overall grade, but he did top out with 104 yards on 12 carries. Lonnie Pryor added 32 yards on 6 carries. There may have been a little loss of focus in the later part of the game, but it was a good performance. It will serve as a great confidence boost.

Quarterback: B+
EJ Manuel hit Rashad Greene on the third play of the game for a 71-yard TD pass. He put the ball right where it had to be and Greene did the rest. Manuel finished 8-16 for 282 yards and 2 TDs. It wasn’t his best performance, but he did what he was supposed to do for much of the game. I also thought he might have been a little too relaxed at some points in the game. A blitz caught him off guard at one point, and he also had a fumble. An extra week to prepare for Virginia Tech will do him some good.

Wide Receivers: A
Much improved from previous weeks. Greene came out focused, and made a big play very early in the game to get things going. Kelvin Benjamin continues to make his presence known. Rodney Smith had a big play that was ruined by a rare fumble. This was still a very good showing by all the receivers. There were a couple of rare drops, and that just comes down to focus. They will be better focused going forward.

Continue reading "Weekly Report Card: Seminoles jump to the head of the class" » 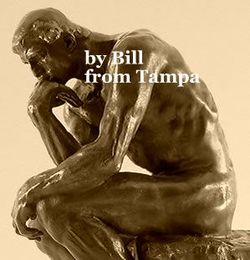 1. Aren't homecoming games supposed to be against doormat cupcakes that your team just rolls over and runs off the road? And here we bring in the Coastal Division leader with a 6-2 record and fresh off a comeback win over North Carolina. I mean a homecoming opponent is a team you are supposed to flatten by scores like 48-7. On second thought .....

2. Or as Gameday's Lee Corso put it, "Duke? ........... No chance." Not exactly true, Lee. There's always a chance. In this case about as much chance as Gene Deckerhoff seeing that pig flying over Sun Life Stadium last week.

3. Following that 75 yard punt return for a touchdown and several long returns by Tyler Hunter, the thought came to mind that Jimbo Fisher changing the punt returner maybe wasn't such a good idea after all. IT WAS A GREAT IDEA!!!! Well, it was a great idea for most of the game, if you know what I mean.

4. After last week's stellar officiating job where several offensive pass interference calls were made against Kelvin Benjamin, raise your hand please if you wondered where the flag was for said offense on Benjamin's ankle breaking crumple to the ground juke on Duke CB Lee Butler.

5. And on said game from last week, I am sure all FSU fans hope crew chief David Epperley enjoyed his weekend off.

6. The wit and Wisdom of Mrs. BFT. Following Duke's ill-fated onside kick to start the 3rd quarter that resulted in not recovering the ball but included an illegal touching penalty giving the ball to FSU at the Duke 29 yard line and two plays later a Devonta Freeman touchdown run came the question from the couch, "I wonder if they will try that again?" BTW, if you didn't see the rest of the game ..... they didn't. Good choice.

7. You know that sound car tires make on the pavement when you hit the brakes too hard, that screeching sound? Envision that sound made by William Floyd in his color analysis of Freeman's coming to a dead stop on a dime move at the line of scrimmage as he immediately changed direction to go around right end. Who knew Bar None did sound effects so well?

8. The award for best description of the Seminoles' prowess on kickoff coverage goes to Deckerhoff for his, "they make aspirin for guys who want to return kickoffs against Florida State" following yet another slobberknocking of the ball carrier at the 17 yard line.

9. The "You Knew It Was Coming Award" goes to ESPNU for flashing Duke PK Ross Martin's statistic of making 14 straight field goals. The result of his 24 yard attempt? Oh, do I even have to say it?

10. Congrats to Louisville in winning its annual Keg of Nails game against Cincinnati. But if I understand college kids correctly, wouldn't they rather be playing for a keg of beer?

Blatant Holding NON-Call of the Week 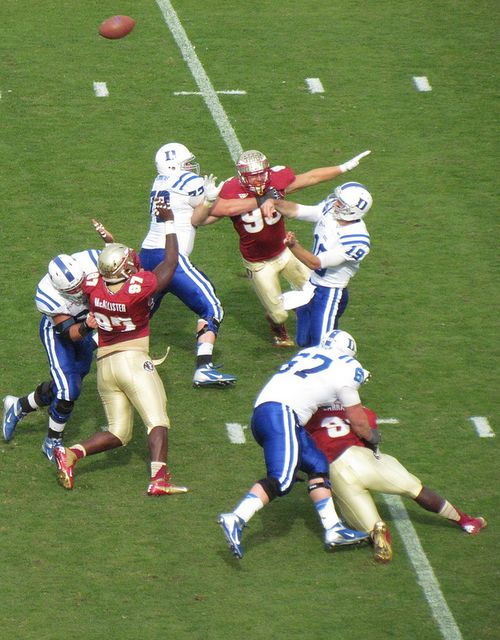 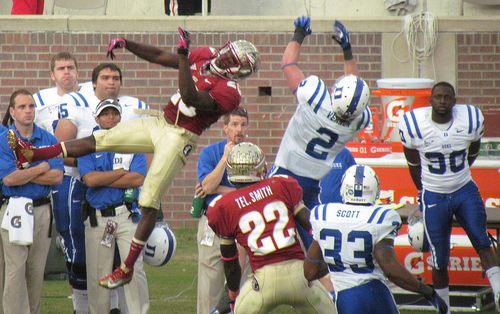 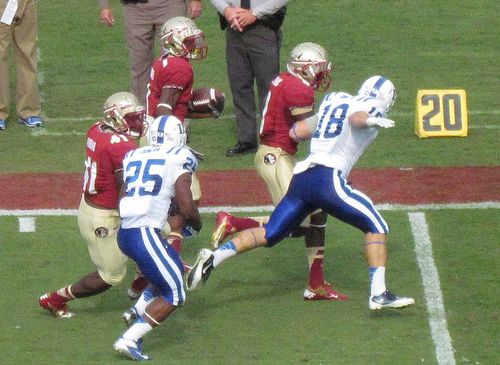 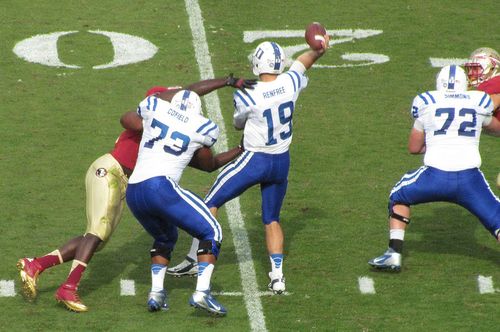 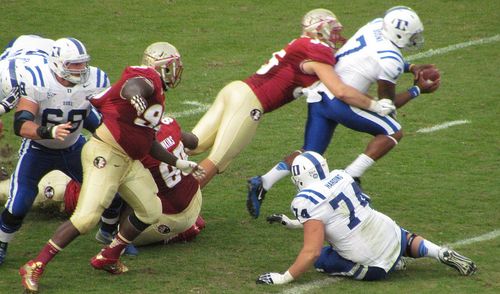 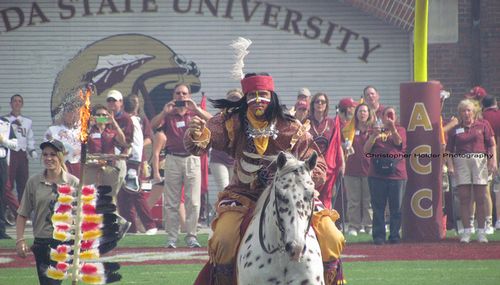 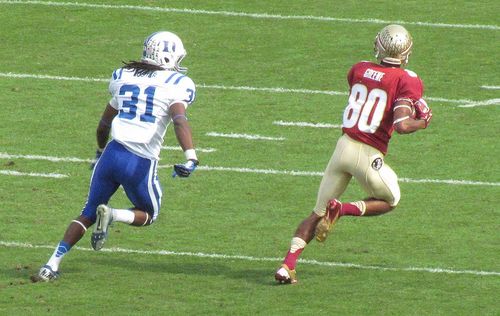 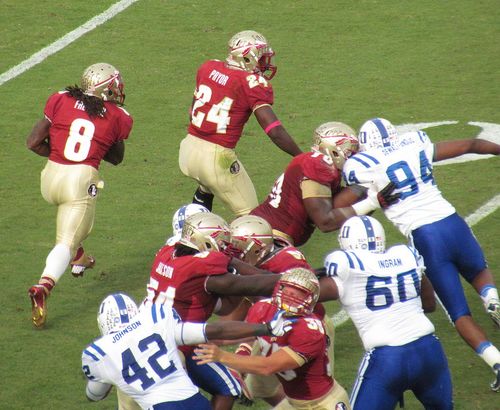 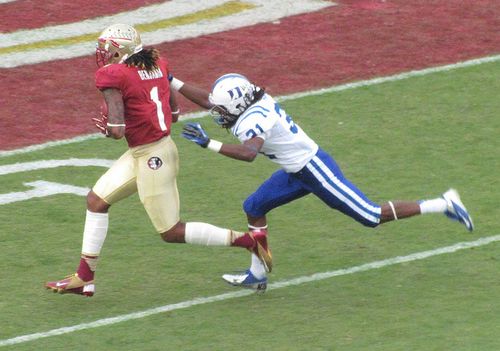 Manuel still pumped in the locker room talks a mile a minute about Saturdays plays -- the big ones and the busted, finally having a few days off, and never having played at Va. Tech.