Manuel was upbeat as ever with good things to say about everybody, including B.J. Daniels, after the Noles win. But you get the idea from this audio that he knows FSU can't have any more off nights like the one against the Bulls.

Post-USF Soundbites: Tank was "expecting a lot of trick plays...but they just came out and ran their offense"

Tank Carradine had the defensive play of the game when his hit on USF's backup QB produced a scoop and score by Christian Jones. Here Tank talks about chasing B.J. Daniels and feeling like he was being picked on by the Bulls gameplan. 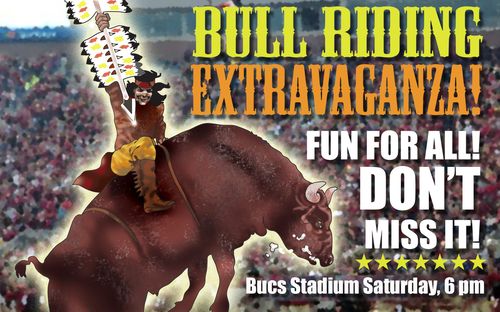 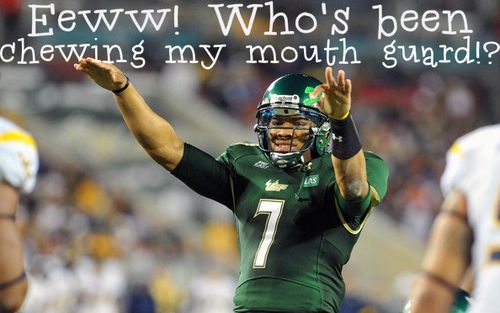 In what has not been a surprise, the USF offense has been very up and down thus far. There were concerns about the offensive line and the running back corps coming in and those have proven to be well founded. While USF is averaging a respectable 150 rushing yards per game, a third of that comes from QB B.J. Daniels.  The RB corps just has not been consistent. As for the line, they have had massive trouble against USF’s non-FCS opponents. While opponents only have 3 sacks thus far, much of that is due to Daniels’ scrambling ability.  He’s been under constant pressure.

Speaking of Daniels, it has not been surprising that he has been very up and down.  Despite nearly 40 career starts, Daniels (1142 yards, 57%, 9 TDs, 6 INTs, 199 yds rushing, 1 TD) is always going to struggle with some of the finer points of the position such as accuracy. However, he is one of the most dangerous QBs in the country when it comes to producing big plays. The only problem for Bulls’ fans is that Daniels is as apt to throw incompletions and interceptions as he is touchdowns. It’s truly feast or famine with him.

With Marcus Shaw battling an injury, USF has gone with the one-two punch of seniors at RB. Demetris Murray and Lindsey Lamar. Murray (207 yds, 3.7 avg, 3 TDs, 5 receptions, 72 yds) is the power back who gets the bulk of the carries while Lamar (141 yds, 6.1 avg, 1 TD, 5 recs, 80 yds, 2 TDs) is a former WR who can hit the home run. He has been a pleasant surprise thus far. Shaw is listed on the depth chart for the game, but has been battling an ankle injury and it’d be a surprise to see him much, if at all.

Luckily for USF, the WR corps is probably the deepest part of the team because the injury bug has hit here as well. Last season’s leading receiver, Sterling Griffin, was lost for the year with a knee injury while former UF transfer Chris Dunkley, probably the biggest home run hitter of the group, missed the Ball State game with an injury and it is iffy if he’ll play. That leaves the onus on Andre Davis (23 recs, 309 yds, 3 TDs), Terrence Mitchell (16 recs, 289 yds, 1 TD), water bug Derrick Hopkins (7 recs, 105 yds, 1 TD), Victor Marc (4 recs), and Deonte Welch (3 recs) as the guys to watch. Davis has been the go-to guy while Mitchell and Hopkins have provided the home run threat.

At tight end, USF has a couple of seniors in Andreas Shields and Evan Landi. Landi caught 57 passes in 2010 and 2011, but has struggled to get involved so far this year.

The offensive line was breaking in two starters to begin the year and Mark Popek was shifting from LT to LG, but the transition has been tougher than I think most USF fans thought. The line struggled so much in the Ball State game that coaches gave up on the experiment of senior Damien Edwards at LT and Popek at LG and had them flip-flop for the second half. They are going to stay that way for the FSU game. Center Austin Reiter and RT Quinterrius Eaton were the two new starters and Reiter has struggled badly. Senior Danous Estenor is the RG and he is okay.

New defensive coordinator Chris Cosh has already drawn the ire of most USF fans as the Bulls have struggled on defense thus far this year. No part of the defense has been immune as USF is allowing 161 yards rushing per game, opponents are completing 64% of their passes, USF has not picked off a pass, and the defense did not record a sack or a single tackle for loss against Ball State. And for anyone who watched USF get picked apart by Rutgers on a Thursday night, the Bulls lack much of a pass rush. Furthermore, Cosh has been content to sit back in soft coverage, hoping opponents will make a mistake. With the pass rush lacking, that seems like a recipe for disaster. 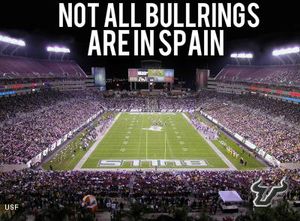 Matt and the gang do a great job over at The Bull Rush Blog. Just the crew to answer questions that Noles want to know about what's up with USF.

Has B.J. Daniels regressed since his amazing freshman year, or is the problem the supporting cast around him?

A: Daniels is kind of an enigma for USF fans.  He is a young man with a strong arm, quick feet, but after having probably his best statistical season last year (in terms of completion percentage, turnovers), he is still making the same mistakes this season.  Daniels is not comfortable sitting back in the pocket and is better suited rolling out and using his feet, something Coach Holtz and offensive coordinator Todd Fitch are not accustomed to and have really failed to adjust their playcalling at times to deal with Daniels.  Daniels is still putting up big numbers, with his arm and his leg, but his decision making and ability to try to do too much hurt the team.  If FSU is able to pressure him and force him to quick throws, it could be a bad day for him if he doesn’t find his targets down the field.

After an impressive road win at Nevada, USF had letdowns against Rutgers and Ball State. What happened?

A: Where do we start?  The Rutgers game was sort of a microcosm of USF football.  Sloppy play, inability to excute on offense, turnovers, failing to get off the field on third down, bad coaching, and the curse of playing Big East games on ESPN on a Thursday night (now 0-8 all time there).  The game against Ball State continued these trends and the answers don’t seem to be very easy for the team. Offensive line is not protecting Daniels, running game is not going and the defense is simply not getting off the field on third down.  All of these issues have happened the last two weeks and it’s going to take a lot for the coaching staff to get it corrected.

The Bulls D ranks in the middle of the pack in Total Defense (#64), ahead of Tennessee, West Virginia and Auburn. After seeing FSU against Clemson, how do you think USF will scheme to stop the Noles offense? 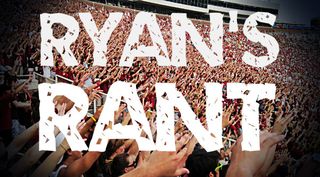 So, I spent time watching and re-watching the game from Saturday, and while most of the media pundits were focusing on QB EJ Manuel and the rest of the Seminole offense, my eyes kept diverting to the Seminole sideline. There, wearing number five in garnet and gold, with a hat on his head, a figure kept bouncing around, always making sure he kept himself involved as much as possible.

This figure was QB Jameis Winston, and his infectious enthusiasm and desire for learning could be seen every time ESPN panned over to the sideline. He made contact with every player coming off the field, praising them for their performance. He followed Coach Fisher, Coach Trickett, and Manuel around, soaking up as much knowledge as possible throughout the entire game.

Watching all this unfold made me recognize how well Coach Fisher is establishing the foundation for future success. Winston was one of the top rated QBs coming out of high school. He had the potential to start for a number of FBS squads, or even play baseball in college or at the professional level. But Winston saw something, despite taking a redshirt, and possibly sitting on the bench for a couple of years, that made him choose FSU.

Part of it could be the relationship he has with Manuel, who took a similar path when he agreed to join Coach Fisher at Florida State. Manuel too, redshirted his freshman year, and spent a few years on the bench, before getting his opportunity.  The two (EJ and Jameis) have had a mentor/mentee relationship since the Elite 11 academy last year.

Part of it could be Coach Fisher’s success with developing QB’s, and the cusp of greatness that Florida State sits at. Watching the Seminoles performance on Saturday, and what possibly could be the start of something big, isn’t it exciting to see the future of all this -- putting him in a position to gain as much exposure and knowledge as possible?

Jameis Winston will do great things for Florida State University, and it's already starting with his learning.

Tomahawk Stickers for last week’s de-clawing of the Tigers:

QB EJ Manuel (482 total yards, 2 passing touchdowns): Manuel has received heaps of praise and accolades from everywhere else. Why not here too?

FSU’s Offensive Line: 667 yards of total offense! How can credit not be given to the big guys up front, especially with how quickly they have come together as a unit.

Seminole Soundbites: Vince Williams says the 2009 team that lost to USF "was light years ago"

Vince is one of the few guys on the team when FSU lost to the Bulls. Here he talks about the culture change since then, including how the team refused to lose when it was being outscored by Clemson.

More soundrich Seminole content you'd pay to read elsewhere. Good stuff about how Wilder has made a quantum leap in technique over the past year. Note: It's hard to hear the last question J.W. is asked, but it apparently was about Devonta Freeman., who had gone home to see family after his brother died.

Matt at the Bull Rush blog confirms what many of us are thinking:

"This is the game everyone has been circling on the calendar since the start of the season.  Players have been talking about it, fans are prepared for it, and the entire Tampa area is ready for the game. While losing two straight games has taken the energy out of the USF fan base a bit, it is still expected to be a turn out. Any time ESPN, a huge team like FSU (highest ranked opponent we have ever played in Raymond James Stadium), it will have the student and alumni excited and ready."

Yep, this game is THE season for USF. Despite ugly losses to Rutgers and Ball State, the Bulls will be charging out like their 1000-lb. namesakes. Can the Noles match that energy? Doubtful. So it might be another "wake up after we're smacked in the mouth" contest. BTW, we'll have more 4-1-1 from Matt about USF later in the week.

Seminole Soundbites: Wilder talks about the "great feeling having a role" on the team

The Noles new power back chatted with the media Tuesday, covering everything from going back to playing in his hometown, to his emerging role, to being frank about his struggles to learn the playbook.