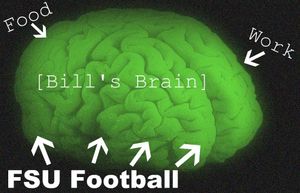 by BILL from TAMPA

1. Memo to Florida Governor Rick Scott: Regarding that little wager with the Governor of South Carolina, the bet (for eating purposes only) of key lime pie vs bar-b-que, you did make sure that the wager was bar-b-que for everyone as in everyone in the state right? I know at least 80,000 or so people that could go for some right about now.

3. Despite losing 49-37 Saturday night there is good news for Clemson coach Dabo Swinney ... he didn't get a speeding ticket on his way out of Tallahassee.

4. For those of you wondering why the ACC referees did not bother to measure for a first down, a controversial spotting of the ball that Jimbo Fisher challenged, after Clemson's fake FG attempt .... I have it through reliable sources that the reason the officials did not use the yardsticks was because they had not yet been trained in the proper technique of adeptly sliding the ball up to the marker. Don't worry though, they should be fully versed in said procedure any day now.

5. Stat of the game: FSU SID Rob Wilson's decibel measurement of 115 during the second half of the game. That would equate to the volume of a rock concert. I'm guessing the 80,000 plus at Doak didn't mind.

6. As everyone knows, former Seminole Lee Corso picked the 'Noles to win Saturday night's game. In doing so he planted a spear into a grass patch and then began to sing the warchant. It would be a wise choice for Lee to NEVER EVER in no way shape or form, God help us all if he did, to decide to become a ........ professional singer.

7. And speaking of former Seminoles, Keith Jones made the following comment while doing play by play for the Miami/GT game, " If I lost 50 pounds, I would be a sex symbol." Mrs. BFT disagreed, btw. I believe her exact words were, "He has got to be kidding right?" No offense Keith.

8. One thing missing in yesterday's  ESPN's Gameday show ..... where was that obligatory guy waving the Washington State Cougars' flag?

9. Now there were plenty of signs at the Gameday show in which to choose from, but my favorite was "Dadgum." I still say that should be added to FSU's motto .... Vires, Artes, Mores, Dadgum.

Bonus Deniably Random and Decidedly Meaningless Thoughts (after the jump)

11. Despite losing their 26th straight game to the aforementioned gatros etc., you have to admit the apparently now renamed Kentucky Tigers were very competitive with the lizards ..... right up until kickoff to start the game.

12. Just a shout out to lizard's Jonothan Harrison who delivered a very crisp snap of the ball to what would normally be his QB under center. Unfortunately for Harrison, Jeff Driskell was in the shotgun at the time.

13. And speaking of snaps of the ball, nice snap to Sammy Watkins who lined up at QB on that two point conversion attempt. We can only assume the center thought Sammy was going to do a fly post pattern.

14. Just a quick memo to Maryland, 31-21 losers to WVU: Perhaps if you concentrated more so on winning the game than breaking out some new uniform every Saturday...Just a thought.

15. Just checking in periodically on the Wake Forest/Army game, I could not help but notice the back of Army's unis. Man, they have a lot of players named West Point on that team. That is one athletically talented family. Sure makes recruiting and searching hither and yon for players a lot easier.

16. Vern Luindquist, in calling the South Carolina/Missouri game, made this comment on FSU's favorite Visor Boy and his stint as a NFL head coach, "Steve had a couple of dismal seasons in Washington in his view." I think you would be hard pressed to find anyone who didn't think otherwise.