« He's Baaaaack: Ryan kicks off his 2012 Season of Rants | Main | Inside skinny on the Racers from Murray State's play-by-play announcer » 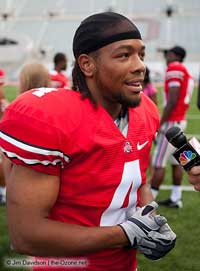 Murray State play-by-play broadcaster Neal Bradley tells us that Jaamal Berry will be a great addition to the Racers, just not on Saturday at Doak.

"The question for 2012 was running back and it looks like they answered that with Jamal Berry. I don't think he'll play against Florida State, though, and if he does I don't think he'll be any impact at all. He's a bowl division transfer from Ohio State. He's just getting eligible this week with the NCAA clearing house. And his time with the team to practice has been limited to just two weeks. He had some good numbers when he was at Ohio State, was a highly sought after 4-Star recruit, and at our level he'll be a fantastic running back. But he's just not in shape at this point, doesn't know the plays and they think it may be as late as Friday just getting him cleared."

This campus altercation last year probably has a lot to do with Berry's departure from the Buckeyes.