Chris Hatcher on everything from his playbook to the rumor about once being considered for FSU's O.C. job 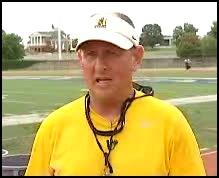 If you put your playbook next to Mike Leach's playbook, would they be almost page for page? Or, say, 80% alike?

"I assume he's still doing the same thing. They'd probably be 80 or 90 percent the same."

Will you have any special wrinkles for FSU, maybe some pages you're adding to the playbook?

"Well, I wouldn't tell you that. But we've got a lot of new freshmen we're going to be counting on, so a lot of it will be how far along we are in our installments. But we're going down for that game and do what we do. And if it's good enough to hang in there with those guys that would be great. And if not, we've got ten other games after that'll be important in our pursuit to win the OVC (Ohio Valley Conference) Championship and make the (FCS) playoffs."

You were 7-4 last year and gave in-state rival Louisville a tough opening game. What do you think your biggest improvements are from 2011 to 2012?

"We gave up a few cheap touchdowns early (at Louisville), and then we shut 'em out for three quarters. But we just couldn't get much going offensively. Casey (QB) didn't have a very good day. And we don't play on the big stage but once a year, so the butterflies kinda got to us early and we kind of dug ourselves in a hole. But I think we'll be a lot better defensively this year. Offensively, our biggest question mark will be our left tackle -- we lost a good one there in Raymond Hobson. And then we lost Mike Harris who had a tremendous year at running the football for us. So those will be two areas where we'll be untested going into the first game. Hopefully we can go down there and put a good show on and not get beat up too bad."

What is the strength of your defense going into the season?

"We played a lot of guys last year that didn't have much experience, and fell off a little bit in the latter part of the season. But this year I think we have a chance to be solid in every area. No really standout guys right now. But this spring we played really good team defense, and that was something good to see because since we've been here that's an area we've been pretty weak in -- our defense. I think we've done a good job of recruiting to get some players in there that can play like we like for them to play on that side of the ball."

Speaking of recruiting, who is the most impressive newcomer that we can look for?

"We've got two of 'em. Corey Addison, who's a linebacker from Jacksonville, Florida, who transferred to us from South Carolina this year. And he had a real good spring playing outside linebacker for us. And then Dontel Watkins, who's a transfer from Utah State, a 6-3 wide receiver who also plays some at defensive back. Tremendous speed, great hands, great range. We feel really good about those guys and hope they have a good year, because we're going to need for 'em to for us to be successful."

How much does the game against FSU mean to your recruiting efforts in Florida?

Oh, it's big, just from the notoriety of playing a team of Florida State's calibre. I'm looking forward to it because I've always been a Florida State fan. You know, Coach Gene McDowell gave me my first job, and he was the first All-American that FSU had. And I'm excited about the opportunity to coach in Doak Campbell. We're gonna go down there and try to win the ball game like you do any time you compete. But it's gonna be an uphill battle. Coach Fisher's done a good job in rebuilding that team, so we'll have our hands full to say the least."

So Coach McDowell gave you your first coaching job. Was that at Central Florida?

Back in 2007 when Bobby Bowden was looking for a new offensive coordinator, some FSU fans were lobbying for you to get the job. Were there ever any discussions you had, and did you have any interest in the job?

"No, there weren't any discussions or anything. And of course we heard the rumors, too, and that was a great compliment. But, no, I've been a head coach since I was 26 years old and kinda been running my own show for awhile. So it would be hard for me to go back and be an indian again."