What are you hoping to see from Florida State this season? 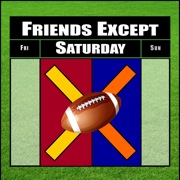 That's the question we asked ChantRant contributors as the season gets so close you can almost smell the turf and feel the stadium rocking. Our leadoff guy to tackle the question of what he's hoping to see from the 2012 Noles is Scott, an FSU grad who voices one of our favorite podcasts, Friends Except Saturday.

What new and different are you hoping to see from the Noles this year?

1. O-Line - I think, like all Nole fans, I would really like to see zone blocking execution that Trickett was known for at WVU. Go back and look at the holes their RB's had to run through. I want to see that. I personally am tired of waiting for the great offensive line we were promised. And for that matter, with all the talent at RB, I want to see one player jump out as the go-to guy. I can't think of a go-to runner we have had since the Leon/Greg Jones era.

2. E.J. - It's time for him to be the consistent field general that his hype has promised. He has all the physical tools, he is plenty smart enough, and finally completed his first full spring after a full year as starter. There should be no reason that a 5-year senior gives any reason for people to call for his back up. But that is exactly what people are muttering after the spring game. I really believe that how EJ goes, this team goes. I want to see EJ make solid reads and just be close to as good as we know he can be. We shall see.

3. Incoming Talent - I think that the majority of the difference makers are at positions that are too deep for them to see solid playing time (Goldman, Edwards Jr, Casher, Eligwe, Northrup). So what I really want to see is the new talent on Offense. Number 1 being Mario Pender, who in my estimation is good enough to take a ton of reps away at RB.

Continue reading "What are you hoping to see from Florida State this season?" »

Walk a Mile in an ACC Referee's Shoes

Raycom's Football Saturday's in the South follows a familiar face as he does his job. You'll recognize Jack Childress, the guy we often love to hate because of questionable calls. But it's hard not to have a bit more respect for the ACC's men in stripes after watching the video above, as well as Part Two here.

Who knew the ACC monitors conference ref's in real time during every game. And that the "Zebras" chat with each team's QB before kickoff. And that they take their share of fan abuse every Saturday, whether leaving the field or driving away from the stadium. Stuff to think about this fall when you see Childress in close-up on the coin toss.

Flashback Friday: Another Greatest Hit as performed by Stanford Samuels

What's up with Jacobbi McDaniel? 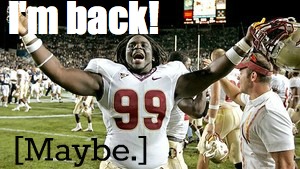 by Bob Ferrante for Chantrant

Odell Haggins likes a deep rotation of defensive tackles. At a minimum, you need four DTs to stay fresh. And he needs Jacobbi McDaniel as part of that group. FSU has Timmy Jernigan, Everett Dawkins and Anthony McCloud. McDaniel is likely fighting for that fourth spot along with Demonte McAllister and Nile Lawrence Stample.

Is McDaniel back from the season-ending ankle injury he suffered against Duke? He's able to put weight on that foot, but we really won't know until he tests that ankle when preseason camp opens Aug. 6.

The reason why McDaniel likely doesn't redshirt is that he's a senior. This is his shot to come back, have a strong season and move on to pro football. Because if he does redshirt, the battle for playing time will be even tougher in 2013 when Eddie Goldman and Justin Shanks have a year under their belts.

Jimbo on his young OL: "I think it'll end up being a strength of our football team"

Here's Jimbo during ACC Media Days interviewed by Chuck Oliver of 680 the Fan. FSU's coach gives a clear picture of the Noles challenge when nine conference games dominate the schedule. He also opens up about the promise of an improved OL, the defense and other critical topics, even touching briefly on Greg Reid's situation.

“I left the house early this morning to play golf, and after we had played nine holes someone from the golf course brought me a note telling me about the NCAA’s rulings; the vacating of 111 wins from Penn State among them. Understanding what that meant, I must say that there is no rejoicing in the Bowden household. Nobody would want to have a title given to him this way, you know it? No sanctions, no amount of money, and no penalties could ever repay or repair the damage done to those young boys. I just hate the way all of this has happened. Nothing that has transpired today has changed what our teams accomplished over the years one bit. All of this attention and focus should be on the innocent victims of this tragedy.”

Are the Bulls in the NCAA's crosshairs?

Heard about the mysterious tweet from Miami Herald's FSU beat writer? It appeared Sunday, then disappeared. If true, his message is bad news for Bulls fans.

USF has never been hit by NCAA sanctions, though the school did self-report a number of minor violations earlier this month. Maybe there's something to the tease by Nohe, or maybe it's just Bull#@%&.

Flashback Friday: The shot heard around the college football world

Greg Jones' famous flick of a forearm and ensuing mayhem never gets old. If this doesn't get you cranked for the upcoming season, nothing will.

Bad news for rivals: Schadenfreude anyone?

Forget the Greg Reid indiscretions for a moment. It's FSU's rivals that are making the headlines today.

• Ray Ray Armstrong is out of second chances at Miami. Losing the senior safety is obviously a blow for the Canes secondary and creates an opportunity for 4-Star freshman Deon Bush.

• Will Muschamp announced this morning that TE A.C. Leonard will transfer. Leonard caught three passes against the Noles last year, but his career was derailed after missing spring practice for law breaking.

• We don't know details, but there's a hot rumor that some bad stuff is about to rain down on the gator program. It could happen as early as this afternoon, so stay tuned.

Bilas' reasons for FSU's high ranking: "Defense and quality talent firmly place the defending ACC tournament champions in this tier. Leonard Hamilton has built his program on getting stops and being hard to score upon, and he has size and athleticism up and down his roster. This year, Florida State should score it easier and take pressure off of its defense to get stops. The key is Michael Snaer, a great competitor who could be first-team All-ACC."

Here's what he calls his Tier 2: