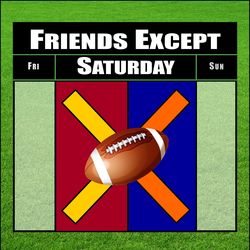 In terms of the schedule for new episodes, the hope is to have a new episode out at least once a week, hopefully more. It all depends on how much time we have during the week, as we both work full time jobs.

Is the focus 100% college football in Florida?

Scott: We are not tied down to just have to talk about FSU and UF. That’s what makes what we do different than what you have come to expect from a FSU or UF podcast. Whatever is on our minds we talk about, just like any other fan would.

If we have FSU or UF topics we want to discuss, we do. But the podcast doesn’t always have to focus on our schools. Just in the first few podcasts we’ve done so far we’ve hit all kinds of topics like: The Petrino scandal, Notre Dame Loyalists, the decline of Canes football, and even had a draft to pick the pro players we feel are most likely to go bankrupt first. Whatever is interesting us that day, gets talked about. I wanted the podcast to be a reflection of the conversations we have all the time: Honest, uncensored and fun.

I really hope everyone gives the podcasts a shot. I am really proud of what we produce and think that listeners will really enjoy it.

How is a Nole able to work closely with a gator? Are there certain topics you stay away from on the show, or will the rivalry produce some "spirited" and memorable listening -- especially during football season?

Bryan and I get along just fine, except for Saturdays of course. But even then we try to remember how cyclical college football is, and try not to rub in wins or losses too much, because it doesn’t take long for fortunes (good or bad) to shift.

We make it a rule to not shy away from topics. If we find it interesting, we talk about it. If we exhaust a subject we move on. There is no minimum or maximum time for any given subject. If it takes 5 minutes to talk about it, then we stop at 5; if it takes 50, then we go 50.

That being said, we will go after each other if the other team does something that warrants discussion, stealing a taco for instance.

Where can we hear your podcast and subscribe? And will listeners be able to interact by phone or email?

Scott: Your readers can listen to the podcast directly from the site: www.fespodcast.com. You can even listen through the site on your mobile phone through the mobile version of our website.

They can also download or stream from ITunes by searching “Friends Except Saturday” or going to this link.

There isn’t a call in option yet, but we would welcome email questions. Readers can email me (Scott) at scott@fespodcast.com and Bryan at bryan@fespodcast.com, or just post in the “Contact us” portion of the website.