« Must-See TV: FSU's Spring Game | Main | Thanks to Dabo for echoing our idea for a spring game with a real opponent »

Putting an end to the Leonard Hamilton to Illinois rumors 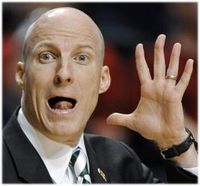 Media reports have Ohio U. Coach John Groce as signed, sealed and all but delivered to Illinois. Groce has gone from a college basketball nobody to a serious contender for more than one job, thanks to his recent success with the Bobcats in the MAC and NCAA tourney (that's Groce on the left indicating how many years he wants on his new contract). Leonard Hamilton? Whether or not he was a serious candidate, it was still good leverage for a lucrative contract negotiation. You can't blame a guy for trying to capitalize on a job well done, can you?