Clemson O.C. Chad Morris on getting even more out of Sammy Watkins and his hyperactive offense 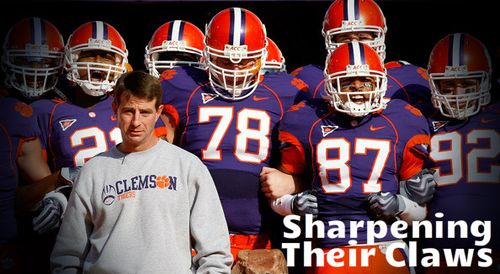 FSU fans have a lot to be excited about in 2012. Expectations are revved for a higher octane offense full of productive playmakers.

Ditto at Clemson. As good as the Tigers were last year, they aren't standing pat. Offensive Coordinator Chad Morris is adding plenty of new wrinkles after picking the brains of coaches at Oklahoma State and Nevada.

On Friday, Morris talked about the evolution of his offense, and development of key playmakers, on 790 the Zone. Here are some of the highlights.

"The first thing that I did (after last season), I evaluated how I called plays and what can I do to get better. And then what can we do on the offensive staff and on the offensive side of the ball to get better. More importantly, how can we get better in the the run game. In studying some of the other programs in the country, obviously I’ve been intrigued with Nevada. You know in the last five or six years they’ve always been in the top five in the country in total offense and running the ball.

"So I was going out there and visiting with those guys to find out a little more about the Pistol. We ran some of it last year. We experimented with it. We liked it, (but) didn’t know enough to keep growing it…Coming into spring ball that was one of our focuses, so I said let's go learn a little bit more…It was a great trip. Coach (Chris) Ault sat down with us himself for two solid days."

On what does Sammy Watkins does for an encore.

"There’s so much more he can do. We’re 8 and 0 (last season), and then somewhere around the first week in November, you noticed a mental letdown or dropoff with him. Coaching high school football as long I have -- well, heck, we started football on August the second, it’s now the first week in November, and this kid has played a whole high school season. So he is mentally taxed. And he himself said, ‘Coach, I’m just mentally gassed.” Those are things that now being a year into it he’s a veteran player.

"He continues to be hardest worker on field. He’s allowing us to coach him hard. And I think there are so many more things we can do with him -- moving him all over the field. It’s another reason we went out to Oklahoma State (to learn) how they moved (Justin) Blackmon all over. So that’s the challenge for him (Watkins) this year, to be able to put him in the backfield a little bit more. And he (even) wants to return punts. He wants to be part of all parts of the team."

On Andrew Ellington’s expanding role in his senior year.

"He wasn’t healthy for the entire year (2011). He still rushed for 1200 yards, right at it. What can a healthy Andre Ellington do with an off season under his belt? Because he didn’t have an offseason last year, he was hurt…He’s gotta get better in receiving as a running back -- catching the ball out of the backfield and making himself a threat. And that was our challenge to him, to be more involved in our passing game."