A reality check from our Seminole Seer 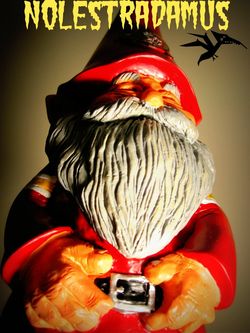 As Nole fans, an increasingly awaited off season event is release of the new year’s football schedule from the ACC mothership. Nailbiting anticipation gives way to grousing, Jello shots or something in between.

But after 24 hours of reaction often fit for a hyperactive teen off his meds, it’s time to remind ourselves of one simple fact. Like it or not, there is absolutely nothing any of us can do about it. Zero. What the ACC has put together, no man can put asunder.

It's something that not even I, NOLEstradamus, can predict, much less manipulate.

Incredibly, you have a better chance to influence the nation’s most disliked institution -- hey, your congressman needs those votes -- than you do the mystical wizards of ACC scheduling.

Slap a traffic-enabled GPS on the dash and have more control over your rush hour commute than if FSU gets a fair shake.

Taxes? At least you can argue your case with the IRS.

Just be glad this year’s schedule is relatively painless. For fans of other teams…well, it’s their turn in the barrel. Virginia Tech faithful, for example, can get their Hokie feathers ruffled about playing back-to-back Thursday night games -- but it won’t change a thing. The scheduling train has left the station.

And now it's a different crapshoot for FSU and all ACC teams, thanks to three of life's other uncontrollable forces: Injuries, weather and, of course, ACC referees.

FSU - Miami: The Day After 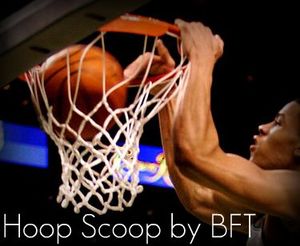 And the good news following Florida State's 78-62 loss to the Hurricanes is? Leonard Hamilton has built a squad that is worthy of an opponent rushing the floor after defeating the Seminoles.

It was a game that even Hamilton was not pleased with, commenting that the team seemingly could do nothing right. In particular on defense (big surprise that he would specifically mention defense). And that comment about his defense came BEFORE the 'Noles allowed Miami to shoot 61% in the second half against a short-handed Hurricane team.

As it turned out, the benching of center Reggie Johnson turned out to be in the favor of Miami. It forced UM to go small, where the taller Seminoles had difficulty staying with the penetrating guards.

It also gave a player like Kenny Kadji the opportunity to shine. The 6-11 forward has the ability to play out on the perimeter or put it on the floor. It is a weakness of FSU when faced with having a big man go out and guard a player like that at the perimeter. If Kadji didn't make the three, he drove past the defender for the layup basket or drew the foul leading to 15 points.

Then there was the offense or lack thereof.

Lousy shooting, lack of poise and more turnovers than a French bakery 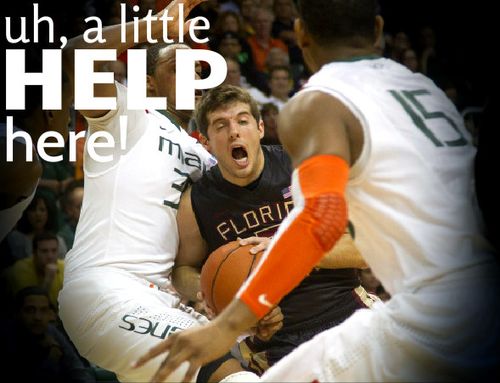 That's how it went for the Noles as they tripped over their own shoelaces Sunday in the Canes' crib. The less said about this one the better.

Here's one good reason not to miss the
Savannah State game

FSU - Duke: The Day After

This just in ...... Duke just hit another three pointer.

The thirteen threes given up by the FSU defense was the largest number of the season to date. Normally very good at the perimeter, the Seminole defense was not able to contain the proficient shooting and Andre Dawkins and Austin Rivers.

Not that Florida State played poorly. Yes, in some spots of the game, Duke burned the 'Noles with wide open threes in transition, forcing Leonard Hamilton to call timeout at one point. Those shots just so happened to coincide with Michael Snaer sitting on the bench when he picked up his second foul of the game at the 9:49 mark.

But that is Duke. They shoot threes, and when they are on they are on. And that was my biggest concern going into the game with Duke getting off to a fast start. That began with an immediate three by Rivers to start the scoring. After that he made some outrageous shots.

Credit the FSU fans that packed the DLTCC for keeping up the energy and not letting Duke take the crowd out of the game, even after Duke got up by thirteen points.

And credit the team for never giving up while struggling somewhat on offense. FSU kept making runs, closing in on the Blue Devils. Duke, however, is used to big games, even on the road. Each time the Seminoles made a run, Duke answered. It's why they are undefeated on the road in the ACC.

Savannah State consulted with its players before scheduling FSU

What does the biggest payday in Savannah State history -- a check that will bring a major upgrade in facilities -- mean to the guys who actually have to play the game and take the bumps, bruises and possibly worse?

No fear here. This Savannah newspaper story reports that A.D. Sterling Steward was concerned enough to ask seniors if playing two big time opponents in a row was too much. "Heck no," was the gutsy reply.

Other details in the story suggest Savannah State might have actually contacted FSU about the game. Steward says he heard about the Noles' schedule opening from relationships in the business.

Also interesting that SSU has to resolve its own scheduling conflict to play FSU. The Tigers are working to get out of a trip to Northern Iowa and may have to pay a $100,000 penalty if they can't line up a replacement opponent for UNI.

Finally, check out the accompanying video in the story, with SSU Coach Steve Davenport putting on a brave face as he calls the Tigers first two games the toughest in college football.

More facts about the Tigers:

• SSU is an FCS school playing in the MEAC with familiar teams like FAMU and Bethune-Cookman.

• The Tigers open the season Sept. 1 against Oklahoma State (ouch). They have an open date on Sept. 15 to lick their wounds after the trip to Doak.

• SSU will receive $385,000 for its trip to Okie State. The fact that FSU is paying $90k more indicates how desperate the Noles were.

• You think Charleston Southern was bad? SSU had the worst offense in the FCS last year, averaging 238.45 yards per game. They were slightly better on defense (116th out of 120 teams), giving up an average of 452.09 per game.

Tallahassee, Fla. - Florida State officials announced Wednesday that Savannah State will replace West Virginia on the 2012 home schedule.  The Seminoles were contracted to play the Mountaineers on September 8th in Tallahassee, but West Virginia notified FSU on February 3 that they would not honor the commitment leaving Florida State with little time and few options to replace the home game.

“West Virginia’s announcement at the 11th hour really put us in a very difficult position,” said FSU Director of Athletics Randy Spetman.  “We contacted every BCS school that had an opening in hopes of replacing WVU with a BCS opponent, but none of those few schools could make it work either because of our dates or theirs.  It is important for our fans to realize that the schools we contacted during the search did not pass on the 2012 game out of concern for the competition, but because of challenges they faced with schedule changes this late in the year.

“We worked with Oklahoma, Arkansas, Texas A&M, Cincinnati, Syracuse and Pitt to name a few along with our current non-conference opponents and television partners, but reached a point where our options simply dried up. We might have been able to play on the road at some BCS schools this season, but that would cost our fans and the university one of just seven chances to play a home game and also would have a negative impact on our local economy.”

“I know our administration was frustrated by West Virginia’s decision and I can tell all our fans that we’ve done everything we could to explore all the options for a home game,” said head coach Jimbo Fisher.  “I believe the plans are for the ACC to go to a nine-game conference schedule once Pitt and Syracuse begin play.  With Florida always on the schedule,  it will leave us just two non-conference games every year so scheduling BCS teams will be more challenging from here on out for everybody.”

Florida State has previously announced the dates for 2012 non-conference games against Murray State (September 1), South Florida (September 29 in Tampa) and Florida (November 24).   Season tickets for 2012 are $321 each, which is a savings of thirteen percent over the purchase price of single game tickets if they are available.  The single game ticket price for the Savannah State game will be $40.00.

A smart scheduling solution for 2013.
Too bad it was just a rumor (wasn't it?) 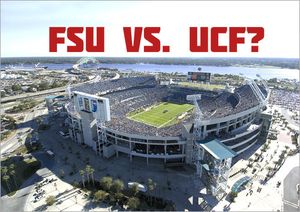 Was UCF's play-by-play guy just dreaming, or did he really have some inside info? At least it was a juicy rumor that Marc Daniels started: The Noles vs. the Knights in 2013 in Jacksonville.

It didn't take long for FSU to kabosh the rumor. Too bad. That matchup would be a creative solution to the Noles 2013 schedule even as the 2012 scheduling problem drags on.

That's the kind of outside-the-box thinking Monk Bonasorte and others need in building future schedules. Talk about a win-win, FSU - UCF works on several levels.

• It fills the void left by West Virginia when they cancelled the 2012 game. If the Mountaineers won't come to Doak this season, why would FSU go to Morgantown next year?

• It's a one-off game at a neutral site. No complicating future schedules with home and home obligations.

• It gives FSU a legit Div. 1 opponent. Not a cakewalk by any means, but also not a huge non-conference hurdle like Oklahoma last year and West Virginia would've been this September.

• Strong fan appeal. Two Florida teams that have only played once -- 17 years ago -- and a bowl game-like atmosphere. Pretty much guaranteed to be a sell-out.