Tonight on Valdosta radio, 5-Star LB Josh Harvey-Clemons was supposed to name the final two teams he's considering signing with. The bad news is he couldn't do it. The good news: from the sound of the Tweet below, Florida State is looking good for his final choice on Wednesday. 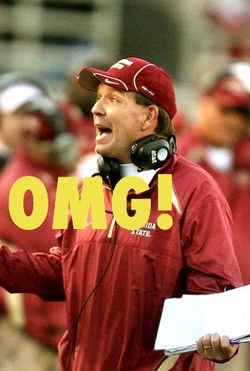 Great. The Noles only commit at a postion that needs fresh blood is suddenly conflicted about his choice. It was that #$%! last recruiting visit, a cross-country trip to California Berkeley. Guess Markuss hasn't heard about the big one -- the earthquake that'll soon have Berkeley looking more like Bedrock, the Flinstone's hometown.

That makes 4-Star LB Reggie Northrup from First Coast even more important to FSU's 2012 class. Maybe being the Noles first, and possibly only, LB signee is enough to snag him from the Canes at the last second.

Some other marquee players that Nole fans are eager to see in Garnet & Gold have announced their signing times on Wednesday, including:

Tales from the Seminoles Recruiting Trail

Wally Burnham was a Florida State assistant, coaching linebackers from 1985-93. Burnham (pictured above) goes back almost to the leather helmet days. Now 69, he's coached for 40-plus seasons, including USF until recently. Now DC at Iowa State, Burhnam shared stories of his recruiting days at FSU with the Des Moines Press Register.

“We were recruiting a kid out of Fort Meyers, and it was between Florida State and Notre Dame,” Burnham said. “We had an official recruiting weekend coming up, but I wanted to see the kid, so I got coach Bowden and we flew down to Fort Meyers.

“We had it all set up that we’d get to the kid’s home and have breakfast with his mom. A guy picked us up at the airport, takes us to the recruit’s apartment, and I knock on the door.”

“Now keep in mind that coach Bowden didn’t even want to make the trip, anyway, and it’s early in the morning,” Burnham continued. “I knocked two or three more times.”

“All of a sudden, I saw a note stuck to the door. The mom left a note that said ‘Sorry, can’t be here. Had to go shopping.’"

They returned to the airport, where they boarded the chartered plane.

“Coach Bowden — he didn’t say a word on the way back,” Burnham said. “He went to sleep, and when we got back to Tallahassee, I figured he was going to fire me as soon as we got back in the office.”

Burnham kept his job and the recruit ended up at Notre Dame.

The success rate of JC offensive lineman at
FSU: Nowhere to go but up 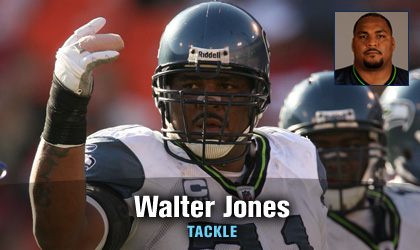 Every Nole fan has high hopes for FSU's two new junior college offensive linemen. But if you look at the odds for success based strictly on history...well, don't bet the farm.

We find only two (including prep school players) who made significant contributions from 1996 to the present.

The most successful was Walter Jones. He played only one season, in ’96, starting spring drills at guard but moved to tackle. Jones was an AP 2nd team All-American, who went on to play 12 years in the NFL, and was a nine-time Pro Bowl selection.

In 2006, massive OL Shannon Boatman (6-7, 309) arrived from Tyler Junior College, where he earned first-team JC All-American honors. Boatman was a regular on the OL -- not spectactular but a contributor -- in 2006-07. He then spent a few seasons with Toronto of the CFL.

Other JC or prep school phenoms we had high hopes for:

Milford Brown (2001), 6-4, 319, OT, Montgomery, AL - Regarded as one of the top junior college linemen in the nation. Played one year then NCAA ruled he was out of eligibility.

Jacob Fahrenkrug (2011), 6-4, 315, OG, Robbinsdale, MN - A Rivals 4-Star, widely considered the top offensive lineman in JUCO ball. Jacob didn't get it done at center in year one at FSU, though later contributed at guard.

But now Rick Trickett has a fresh opporunity to change the trend of JC OL that don't work out. He can do it by, among other things, transforming two raw but talented Europeans into dependable American football linemen that protect their QB and consistently open holes. In other words, this is the year Trickett truly earns the fame or takes the blame.

Since FSU's latest OL commitment is so new to football, not much is known about him. But back in December 6'-6" 320 lb. Menelik Watson revealed to an Auburn site details about his background, including:

• He was introduced to football last August at Saddleback CC in California. His coach wanted to get him in the lineup by the fourth game on the schedule. Watson did it, making his debut on Sept. 24th. It was the first of eight games he'd play in his incredibly brief football career.

• Saddleback's ground game improved dramatically with Watson in the lineup, going from 120.7 ypg before his first game to 153.9 ypg the rest of the season.

• Menelik's first sport was basketball. His play at an academy in Spain led to a scholarship at Marist College in New York, where he played in 29 games in the 2010-11 season.

• When he decided to try football last year, he worked out with NFL players before going to Saddleback. During those workouts Watson said he ran a 4.72 40 -- in tennis shoes. In several ways Wednesday night's game against Wake Forest was more of a trap game for Florida State than the Maryland game was. The Seminoles had just come off of a dramatic win over Duke, traveled back home only to return to North Carolina a few days later, were playing an improved over last season but still struggling Demon Deacon team, and could have been looking ahead to having the next seven days off before its next game.

And the game seemed to start out that way with the 'Noles playing sluggish trailing 7-2 early, unable to make baskets and several turnovers or near turnovers. Nearly ten minutes into the half FSU was just 5 of 17 from the floor.

Leonard Hamilton called it "not so much a lack of effort but a lack of focus on offense."

Florida State found that focus however, eventually cruising to a 75-52 win to improve to 14-6, 5-1 and still tied for the conference lead.

2012 ACC schedule beginning to leak out

Georgia Tech players are tweeting and otherwise telling friends on campus that the Jackets will play Virginia Tech on Labor Day in Blacksburg -- the marquee Monday night game FSU and Miami played in the past. Tech players say it's offical from the league and they learned it today in a team meeting. Can the rest of the schedule be far behind? 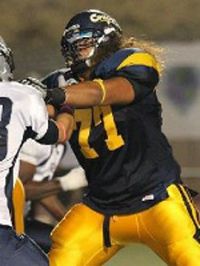 The Tampa Bay Times reports that the number one JC offensive lineman, Will Latu, has only two teams left on his list, and one of them isn't FSU. Oklahoma and Utah are Latu's choices. At the risk of sounding like sour grapes, Latu might've been too much of an academic risk -- if he qualified in the first place. A few weeks ago Auburn stopped recruiting the former Tampa Gibbs OL because of doubts about whether he'd graduate from College of the Canyons (California) in time for summer workouts.

That leaves giant Menelik Watson (Saddleback College, CA) as the Noles best hope to join Daniel Glauser as an OL newcomer. Watson, who's from the UK and has played football only one year, tripped to Auburn last weekend and is supposed to visit Oregon and Rutgers before deciding on a school.

The most valuable returning player on the Noles offense, after E.J., is arguably Rashad Greene. The true freshmen was the most electric player in 2011, with flashes of some of the great receivers in Seminole history. And it's only after the season we get the full story on Greene's recruitment, his first year in Garnet & Gold, and even how his academics are going. Despite a few factual errors, it's a terrific read. Make that a real "feel good" read about a talented guy that makes Nole fans more than a little excited about the 2012 season.

No offense, but lack of offense was apparent right from the start in 2011 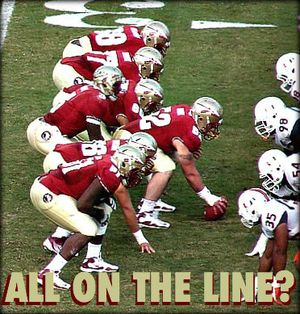 It took just a minute and 20 seconds into the season to discover FSU's 2011 BCS hopes had an Achilles heel. In fact, it showed up on the very first running play of the first series of the first game.

At 13:40 of the first quarter, on second down and ten after an incomplete pass, Ty Jones takes a handoff. Led by Lonnie Pryor, he rushes toward the middle of the LOS where he meets a solid wall of blockers and defenders. Jones bounces to his right, off balance because he either trips or is tripped up by a defender on the ground. Meanwhile, right tackle Zebrie Sanders has fired off the line to engage a Louisiana Monroe corner. But the defender effortlessly slips around the larger Sanders and nails Jones before he can regain his balance.

Result: One yard of forward progress, though Jones is driven back three yards by the corner and two other Warhawks running free in the backfield.

It wouldn't go much better on the second possession, just 11:03 into the opening quarter. With good field position at ULM's 44, Jones takes a first down handoff and gets two yards through the middle. On second down Jones can manage only a yard running left. With third and seven, E.J. fades to pass, is pressured, can't find a receiver and the Noles punt. A scoring opportunity wasted. And FSU, obviously determined to prove what it could do on the ground, was denied.

And so it went through most of the afternoon. And though FSU won handily, the final stats were bittersweet. A mid-major defense that was 67th in stopping the run the season before (allowing more than 159 ypg), held FSU, a team predicted to finish in the top ten, to 92 total yards rushing (ULM had 99). Seminole running backs gained just 77 net yards, including a loss of one yard and two rushes for no gain. E.J. was sacked twice for six yards lost.

The Achilles heel (duh) was the offensive line. Yes, injuries were a major part of the problem. But the lack of solid backups can't be overlooked.

Too many recruits couldn't measure up to Rick Trickett's mold of a sleek and mean O-lineman, even though he thought enough of them as prospects to recruit them. Signing OL was another problem. Some years during Trickett's five seasons, there just weren't enough offensive linemen in the class.

Other questions loomed in 2011. Jacob Fahrenkrug looked to be a valuable newcomer to replace the departed Ryan McMahon. We heard promising comments from coaches about Fahrenkrug's development during spring and fall practice. He supposedly picked up the system so well, he’d be the starting center against ULM. Yet if you look at a DVD of the game, Andrew Datko -- not Fahrenkrug -- is clearly making the line calls. Of course, that lineup experiment didn’t last long. Fahrenkrug was shifted to guard, though didn't do much to help the OL's overall effectiveness.

Continue reading "No offense, but lack of offense was apparent right from the start in 2011" »