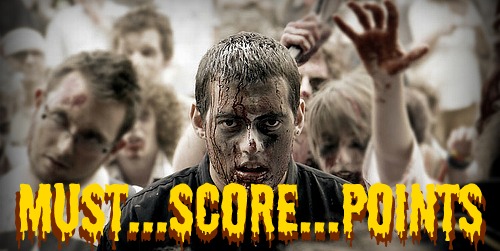 Like a graveyard full of zombies, the Noles rose from the dead, clawing their way out of a deep hole they'd dug for themselves, thus avoiding being the chumps of the Champs Sports Bowl. Damn right there's a lot to celebrate.

• An offense that appeared on life support for the past ten quarters (including the UVA and gator games) got a second half transfusion of mojo that should carry into next year.

• After letting Irish defenders run wild in the backfield, FSU's fresh-out-of-puberty OL came of age (please, Lord, let's hope), giving E.J. time to set up and nail receivers instead of just flinging it while being mugged by three guys.

• FSU scored on all four trips to the red zone.

• Three key INTs, four sacks and only 280 total yards by the Irish. Give Stoops another raise and the Employee of the Month prime parking space.

• Who among us didn't kiss the 2nd half momentum goodbye when both Rhodes and Reid went to the sidelines. Not to worry, sophomore Terrence Brooks played like a starter, even making the last interception.

• Let's hear it for all the freshmen: Greene, Matias, Jackson, Hart, Barron, Freeman, Timmy J. and others who earned letters for their sweaters.

• And how about the guys who'll be freshmen next season -- and how FSU's stock went up in their eyes just a month before national signing day.

• Kudos to Jimbo for pulling an extremely rare trick play at exactly the right time (when N.D. least expected it). Abram's run on the fake punt was a hair short, but Fisher deserves applause for the guts to call it.

• Anyone who takes off their Garnet & Gold glasses knows there's a boatload of questions to be addressed over the next eight months. Did the OL really turn the corner? Can the Noles ever develop some semblance of a run game? Can a few more good men emerge at LB and safety? Ah, but that's stuff to worry about later. Tonight is for celebrating. And if you're really good, you can make it last til around Monday noon.