« Rees? Hendrix? Two-headed QB? Who'll be under center for the Irish on Thursday? | Main | Is there a weak spot in N.D.'s defense? »

So all along, FSU coaches were looking ahead to next season 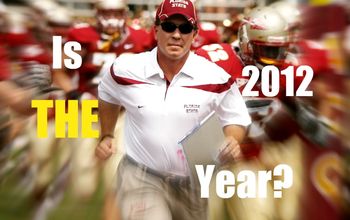 Tom Lunginbill of ESPN, a former ACC QB at Georgia Tech, revealed Monday that Florida State fans aren't the only ones expecting big things in 2012.

“I went to Florida State in the spring to visit their staff. And even the coaches behind closed doors were saying, ‘We’re getting a lot of hype right now, but 2012 is the year we think we’re going to be pretty good.’ Take a look at the roster. E.J. Manuel was banged up and didn’t play the entire season. The starting tailback is a true freshman. The starting tight end is a true freshman. Their most significant player on offense is Rashad Greene, he’s a true freshman. This is not an experienced ball club with a lot of leadership. And when you play a lot of youth at once, you struggle to find leadership through difficult times...And I think when you’re supposed to be a championship quality team, you’ve gotta beat the teams you’re supposed to beat. That means you have to beat Wake Forest, and you have to beat Virginia. I felt they were a year away going into this season. But next year there’ll be no excuses.”